While England, fresh from a 1-0 win over Croatia, are strong favourites, Scotland and Aston Villa midfielder John McGinn believes Steve Clarke's side are capable of overcoming the perceived gulf in quality.

"The English media will have you believe the gap is humongous. So it is up to us on Friday to prove that (isn't the case)," he told a news conference.

"They have a population of 55 million, we have five million. They have worldwide superstars all throughout their squad, so we will be underdogs.

"But we have a few wee superstars in our team who can play well and cause them problems."

First played in 1872, the fixture has taken place 114 times and the Scots have enjoyed plenty of success down the years.

England have won 48 times, their northern neighbour 41, and there have been 25 draws.

But while the 1960s and 70s saw plenty of memorable clashes, including in the now defunct annual British Home Championship, the rivalry has waned in recent years.

Scotland are playing in their first European Championship since 1996, when they lost 2-0 to England at Wembley, and have gone through a long decline only now showing signs of ending.

The Scots have not beaten England since 1999 - and even that 1-0 victory was part of a two-legged defeat in a Euro 2000 qualification playoff.

In the glory years of the rivalry, Scotland could boast players with the top clubs in England and the current side has Liverpool's Andy Robertson at left-back and Manchester United's midfielder Scott McTominay among a number of Premier League players.

"We compete against these guys week in, week out and we seem to hold our own. The message is we can compete, they are full of top players on the pitch, and on the bench. If we play to our capabilities we will give them a game," McGinn said.

Scotland felt they had "let the nation down" in their 2-0 home defeat to the Czech Republic, he added, a contrasting mood to the English who have basked in praise since their opening win.

"It's similar to the games against Man City and Liverpool – those type of games you have a different feeling," he said.

"You can't put a finger on it – because you approach every game the same. But the build up, its just unique and I'm really looking forward to it." 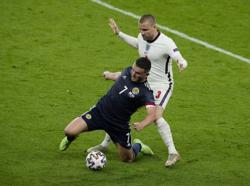