Team manager Datuk Yusoff Mahadi has urged Malaysia to end their losing streak in Dubai and do their best to beat Thailand in their last Group G tie in the World Cup 2022-Asian Cup 2023 second-round qualifiers in Dubai on Tuesday.

They need a win for a third-place finish to keep alive their hope of qualifying for the Asian Cup 2023 third round automatically and not having to worry about playoff games to get there.

It was their second demoralising defeat after losing 4-0 to hosts United Arab Emirates last week.

Yusoff said the team wanted to win it badly for Malaysia and their coach Tan Cheng Hoe, whose father passed away just 12 hours before the game against Vietnam.

“We hoped for a better result after the game against UAE. We thought we could get at least a point, but we conceded a last-minute penalty against Vietnam. So it was disappointing not only for us but the fans as well, ” said Yusoff.

“We met Cheng Hoe before the game. Even though he was sad, but his commitment was at 100%.

“The players promised to give their best for him. A win could have eased his sadness, but it didn’t happen according to plan.”

The Golden Dragons opened the scoring through a powerful header by Nguyen Tien Linh in the 27th minute after a corner kick, before the Harimau Malaya equalised through Guilherme de Paula’s penalty in the 72nd minute.

However, Vietnam secured the three points through Que Ngoc Hai’s penalty 10 minutes later, a decision questioned by the fans.

It was Malaysia’s fifth defeat against the Golden Dragons.

Yusoff said it was time to redeem themselves.

“We have to focus. The game against Thailand is a do-or-die mission. No excuses as coach Tan has to be prepared to face Thailand and get a win. We have lost four games in a row, if you include the two friendly defeats against Kuwait (1-4) and Bahrain (0-2).

“Our team’s dignity is on the line. We have to restore the morale. If we beat Thailand, it will give us some confidence entering the next stage of the Asian Cup qualifiers.”

Meanwhile, Cheng Hoe does not want to blame anyone for the defeat.

He said his side were unlucky to concede two goals via set pieces but hopes his charges would work to improve and play as a team so that they would shine in the future.

“Overall as a coach I am very happy with the performance of our players, despite the defeat, ” said the 53-year-old.

“It was not an easy game, but everyone was very committed, disciplined on the pitch, maybe due to the transition (change in tactics by Vietnam to defence and launching counter attacks), we lost concentration on the set pieces.”

Cheng Hoe wants his players to focus on their final group tie against Thailand to get an easier path for the Asian Cup qualifications.

“Thailand won’t be an easy game because they had more rest than us (after their 1-3 defeat to UAE on Monday). Definitely as a coach, I have to prepare recovery for the players and get ready for the next match, ” he added. 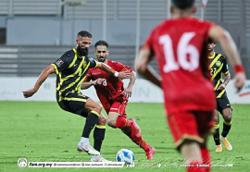