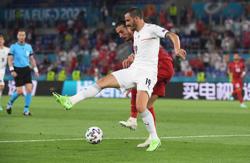 ROME (Reuters) -Italy kicked off the European Championship in emphatic style on Friday as they delivered a commanding performance to sweep past toothless Turkey 3-0 in the Stadio Olimpico and stamp their early authority on Group A.

After a goalless first half, an own goal and strikes by Ciro Immobile and Lorenzo Insigne were just reward for the home side, who played with relentless positivity from the start.

Their dispiriting failure to qualify for the 2018 World Cup looked a distant memory as they stretched their unbeaten run to 28 matches in a buoyant atmosphere.

They were helped by a flat display from Turkey, who lost their fifth consecutive opening match of a European Championship finals and barely mustered a worthwhile attack all night.

"It was important to start well here in Rome and it is a joy for us and for all the Italians," said coach Roberto Mancini.

"We produced a good performance and I think we satisfied everyone, for the fans and all the Italians watching. (But) there are six games to go and there are a lot of good teams."

Switzerland and Wales, who meet in the group's second game in Baku on Saturday, always knew Italy were the group favourites but the size of their task has suddenly looked somewhat bigger.

After a build-up featuring a spine-tingling rendition of Nessun Dorma by opera singer Andrea Bocelli - channelling thoughts of Italia '90 - a spectacular fireworks display and a typically raucous rendition of Italy's national anthem, the 16,000-strong crowd was in fine voice by kick-off.

They were given plenty to cheer too as Italy made all the early running against a Turkish team happy to sit deep and invite pressure.

However, Mancini’s side were left frustrated in their efforts to break through the wall of red shirts.

Giorgio Chiellini had a header tipped over with a spectacular one-handed save by Ugurcan Cakir and Immobile nodded a cross wide as Italy went in at the break with 14 attempts to none from Turkey - but without a goal.

They kept probing and their patience was rewarded when Berardi fired a cross into the six-yard box where Demiral chested the ball into the net - the first time in a European Championship that the tournament’s opening goal was an own goal.

The ever-dangerous Leonardo Spinazzola had a shot beaten away and Manuel Locatelli’s low effort was palmed wide before Immobile doubled Italy's lead by pouncing on Cakir’s parry from another Spinazzola effort to neatly knock in the rebound.

The Azzurri’s dominance was rewarded again when Immobile threaded a pass to Insigne, who placed a precise finish into the bottom corner with 11 minutes remaining.

It marked the first time Italy had scored three goals in a match at the Euros at their 39th attempt and capped a perfect start.

Mancini had told his players they should enjoy themselves and seek to entertain and that was exactly what they did for a jubilant home crowd.

There was only gloom in the visiting camp as veteran coach Senol Gunes, who led Turkey to third place at the 2002 World Cup, apologised for the performance.

"I was expecting a better game, and I am disappointed and we are sorry," he said. "Italy totally controlled the game."

On June 16, Italy face Switzerland in Rome and Turkey take on Wales in Baku in the second round of Group A games.