Eyes on the ball: Liridon Krasniqi (centre) in action against two Bahrain players during the friendly in Manama. — FAM

National coach Tan Cheng Hoe has called on his charges to not overstep the mark even when things don’t work out in their favour.

Cheng Hoe made this timely reminder after Safawi Rasid got himself sent off unnecessarily during Malaysia’s 2-0 defeat to Bahrain in the Tier 1 friendly match in Manama on Friday.

The Johor Darul Ta’zim (JDT) star was handed a second yellow card for protesting against referee Turki Mohammed Al-Khudayr’s decision to halt play when Luqman Hakim Shamsuddin made a surging run into the opponents’ final third.

A furious Safawi, who was already substituted, appeared to step out of the bench and splashed water from a bottle he was holding.

Liridon Krasniqi also overreacted by throwing a bottle onto the floor, resulting in him getting booked, too.

Safawi, however, got lucky as he is still eligible for the crunch tie against United Arab Emirates (UAE) when the World Cup 2022-Asian Cup 2023 second round qualifiers resume in Dubai next Thursday.

According to Article 65 of FIFA disciplinary code, a player who gets sent off in a friendly match will only be ineligible for the team’s next friendly match.

“We hope all our players can keep their emotions in check, ” said Cheng Hoe, without singling out any of his players.

“It’s not easy when you’re playing a game away from home.

“The players were probably affected by the goals (the team conceded), so their emotions were running high.

“But that’s part and parcel of football, and we’ve got to control our emotions so that we don’t lose our focus during the match.

“This applies even if we’re not satisfied with the referee’s decision.”

Cheng Hoe certainly made a point as it could be costly to lose any of the players to disciplinary issues, especially when Harimau Malaya face an uphill battle to finish as the top two sides in Group G.

Besides UAE, their other two matches are against Vietnam (June 11) and Thailand (June 15).

Despite their second straight defeat, Cheng Hoe saw a lot of positives in the team’s performance compared to their 4-1 thrashing by Kuwait earlier this week.

Malaysia paid the price for Irfan Zakaria’s error when he brought down Mahdi Abduljabbar in the penalty box and that earned Bahrain their first goal in the 41st minute. Then a loose touch from goalkeeper Farizal Marlias saw Jassim Marhoon taking advantage to score the second in the 61st.

“The defeat was due to individual mistakes. And the obvious weakness we need to work on is the transition of play, ” said Cheng Hoe.

“We attacked better this time and created several goal-scoring chances with some good combinations from the boys. They did well as a team.” 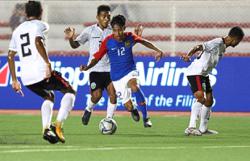