ISTANBUL (Reuters) - Veteran Turkey striker Burak Yilmaz and his young compatriots Yusuf Yazici and Zeki Celik have been at the heart of Lille's march to their first Ligue 1 title in 10 years.

The trio now aim to carry their club success onto the international stage at this year's European Championship, recapturing the spirit which took Turkey to the semi-finals of the 2002 World Cup and Euro 2008.

Yilmaz and attacking midfielder Yazici have spearheaded Lille's attack this season, with 32 goals between them in all competitions, while Celik has played an important role at right back with 34 appearances and four goals.

The 35-year-old Yilmaz, from Antalya on Turkey's south coast, has flourished since joining Lille in August and has been their top scorer with 17 goals in all competitions.

He is among the nominees for Ligue 1 player of the season, alongside Neymar, Kylian Mbappe, Memphis Depay and Wissam Ben Yedder.

"He's calm and determined. He's like an eagle, ready to strike," former Lille player Francois Brisson said of Yilmaz. "He makes me think of (Zlatan) Ibrahimovic. Those guys, as long as they play, will be leaders."

In a senior international career spanning 15 years he has become Turkey's second highest scorer after Hakan Sukur, with 28 goals in 66 appearances. In March he scored a hat-trick against the Netherlands in qualifying for the 2022 World Cup.

The son of Super Lig club Antalyaspor's former goalkeeper Fikret, Yilmaz is one of a small group of players who have represented the big three Istanbul teams and the other major Turkish club Trabzonspor.

It was from the Trabzonspor youth academy that 24-year-old Yazici emerged before leaving the Black Sea town to join Lille in August 2019 on a five-year deal for 16.5 million euros ($20.09 million), the biggest in the Turkish club's history.

Yazici has scored 14 times for Lille in 40 appearances this season, including Europa League hat-tricks against Sparta Prague and AC Milan.

He made his senior debut for the Turkish national team in June 2017 and has 30 caps.

While the attacking Turkish duo have created headlines in France this season, it was defender Celik who was the first among them to arrive at Lille in July 2018.

The 24-year-old right-back began his career at his hometown club Bursaspor in northwest Turkey but had only just joined the youth academy when the club won the Turkish Super Lig in 2010.

He first represented Turkey in 2018 and has 19 caps, scoring two goals in a friendly against Uzbekistan in 2019. He started seven of Turkey's eight qualifying matches for Euro 2020. 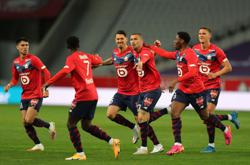