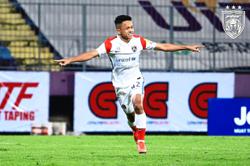 The “chosen ones” will shoulder Malaysia’s challenge in the second round of the 2022 World Cup-2023 Asian Cup Qualifiers in the United Arab Emirates (UAE) next month.

Cheng Hoe has retained 19 players who were called up in the previous training camp in Johor Baru two months ago while Perak defender Shahrul Saad and Selangor striker Shahrel Fikri Md Fauzi were dropped due to injuries.

It came as a surprise that no players were selected from Terengganu, who are currently second in the Super League.Among their players who have impressed are wingers Hakimi Abdullah, Faisal Halim and leftback Arif Fadzillah.

“I know it’s not easy for those not selected, but we are not at a stage where we can afford to make trials and errors.

“The door is still open for them.

“These 25 players selected, I believe, will elevate the team. We have reviewed all the criterias and they fit the bill. I believe this is the best team, ” he said.

Eyebrows were also raised when youngsters Arif, 19 and KV Kortrijk striker Luqman Hakim Shamsuddin, 18, who do not have international caps, were selected.

“Luqman has proved himself in the Under-16 and 19 stages. He scored goals and the potential he has is immense.

“Plus, he has been training well in Belgium. I’m sure he is a much better player from his exposure there and he will be an asset to our strike force.

“As for Arif, I’ve been monitoring him for quite a while. He has been doing well in the Super League and on that basis, I selected him.”

The Harimau Malaya will begin their final preparations at the National Stadium in Bukit Jalil from May 16-19 before flying to Dubai on May 20. The players will play a friendly against Kuwait three days later.

The squad will then fly to Manama where they will play another friendly against Bahrain on May 28.