BIRMINGHAM, England (Reuters) - Manchester United manager Ole Gunnar Solskjaer was delighted after a comeback 3-1 win at Aston Villa mathematically kept his side in the title race while it also secured a top-four finish in the Premier League.

Defeat would have handed leaders Manchester City the title despite their 2-1 home loss to Chelsea on Saturday but United erased a 1-0 first-half deficit as Bruno Fernandes, Mason Greenwood and Edinson Cavani struck after the break.

Still, Solskjaer was realistic in assessing that the result has most likely only delayed the inevitable, with leaders City 10 points ahead of second-placed United.

City have 80 points with three games left while United have 70 and a game in hand, meaning only a monumental collapse by Pep Guardiola's side could open the door if United won all their matches.

"That would be the biggest upset in football history but at least we don’t travel back to a party on the blue side tonight," Solskjaer told the BBC.

"We'll try to delay it as long as we can," he added in a post-match interview with Sky Sports.

United could put some more pressure on City if they beat visiting Leicester City on Tuesday and Liverpool on Thursday before City travel to Newcastle United on Friday.

But winning the Europa League will be a more realistic target for United as they take on Spanish rivals Villarreal in the final on May 26 in Gdansk, although they suffered a blow as captain Harry Maguire got injured against Villa.

Maguire will have a scan on Monday to determine the extent of what looks like an ankle injury after he landed awkwardly following a duel with Villa forward Anwar El Ghazi, leaving Solskjaer sweating.

"We’ve got to check it," the Norwegian told Manchester United's official website http://www.manutd.com.

"It might be a few weeks, might be a couple of days - who knows. I’m not a doctor and we’ve got to check him and scan him (on Monday). He twisted his ankle and got a knock."

Maguire himself tweeted that he was hopeful the injury was not too serious and that he'd be "back playing soon."

Solskjaer also pointed out he would inject some fresh blood into his starting eleven against Leicester with United facing a congested fixture list in the season's home straight.

"I think everyone is capable of doing a Thursday-Sunday. But to put in Tuesday is more or less demanding too much of them," he said.

"Adding Thursday is impossible - absolutely physically impossible. So I have to now make sure that I don’t run the risk of getting injuries. The boys who played Thursday night and today will not play 90 minutes on Tuesday, for sure." 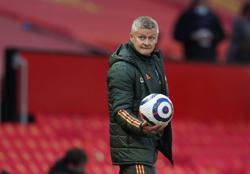