(Reuters) - Manchester United manager Ole Gunnar Solskjaer is furious with the Premier League after the club were ordered to play three matches in five days, saying he may have no other option but to rotate his squad heavily against their top-four rivals.

"I've never seen that schedule before, not in modern-day football," Solskjaer told a news conference on Friday.

"We've been dealt a very bad hand by people who sit behind their desks in suits who have never played football and understand what this is about."

Solskjaer said the schedule could skew the race for the top four as he cannot pick his strongest team against third-placed Leicester as well as seventh-placed Liverpool.

"One of them might not be happy because I play a full team maybe in one and the next 11 in the other," said Solskjaer.

"I've got to look after the players. There might be someone not happy with my team selection for one game or two games. That might affect whoever gets into fourth position or the Champions League. That's not my problem."

Captain Harry Maguire, who has played every Premier League minute since he arrived at Old Trafford at the start of the 2019-20 campaign, could be rested as a result of the congested schedule.

"I just keep my fingers crossed that nobody gets injured," Solskjaer added. "Maguire has played every minute for us in the Premier League since he came.

"That's another record or another stat he could have been very proud of but I can't really see that happening now."

United are on course for a second-placed finish in the Premier League and could wrap up the season with a trophy on May 26 when they face Villarreal in the Europa League final. 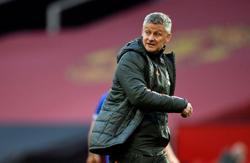