BIRMINGHAM, England (Reuters) -West Bromwich Albion's forlorn hopes of avoiding relegation from the Premier League suffered another setback as they were held to a 2-2 draw at Midlands rivals Aston Villa on Sunday after conceding a stoppage-time equaliser.

Villa substitute Keinan Davis poked the ball home from close range after the hosts had come within touching distance of victory as Matheus Pereira's penalty and a Tyrone Mings own goal cancelled out Anwar El Ghazi's early spot kick for the Baggies.

The result left West Brom second-bottom on 25 points from 33 games, nine adrift of Brighton & Hove Albion in the safety zone with five games left and a mammoth task to escape the drop.

Villa's own fading bid to clinch a European spot also faltered as they stayed 11th on 45 points from 32 games, nine adrift of sixth-placed Liverpool who have played a game more.

West Brom boss Sam Allardyce rued his team's missed chances to put the game out of Villa's reach when they were 2-1 up.

"Not quite enough for us unfortunately, but I can't praise the players enough," Allardyce told BT Sport.

"In the end, the third goal didn't come our way. One slip and we paid the price. There have been plenty of games like this for us where we've ended up drawing instead of winning. But at least the performances have been there."

His Villa counterpart Dean Smith told the BBC: "It would have been a travesty if we lost, that's for sure. We controlled the game, had a really good start.

"We scored the penalty, got one given against us, not sure why. I think I will have to prepare the lads for non-contact season next season. We showed a lot of character."

Anwar El Ghazi fired Villa ahead with a ninth-minute penalty after Semi Ajayi fouled Ross Barkley as the home side pegged the Baggies back early on.

After weathering the storm, West Brom levelled in the 22nd when Matheus Pereira drilled a penalty past Emiliano Martinez, with Ezri Konsa adjudged to have hauled down Ainsley Maitland-Niles after a VAR check.

Chances went begging at either end before the visitors' Mbaye Diagne took advantage of a Konsa error and raced clear with his low shot beating Martinez after taking a heavy deflection off Mings in the 48th minute.

There were more chances and brilliant saves at both ends before Davies, who had rattled the post in the 86th minute, poked home the equaliser as he capitalised on a mix-up between defender Kyle Bartley and keeper Sam Johnstone.

"When I first arrived we found it difficult to compete at Premier League level, we have done that now consistently for 10 or 12 matches but unfortunately we haven't won enough matches." 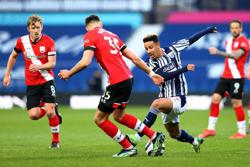 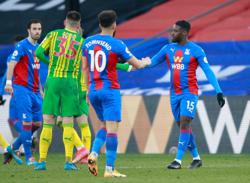