(Reuters) - Arsenal's owners and the club's chief executive have apologised to the players for any disruptions caused by the club's involvement in the botched breakaway attempt to form a European Super League, manager Mikel Arteta said on Thursday.

Arsenal were among six Premier League clubs who signed up for the Super League project before withdrawing amid what Arteta described as a "big tsunami" of protest that killed the plan involving 12 of Europe's top clubs as founder members.

"I found out just a little bit before the news was leaked," Arteta told a news conference ahead of Friday's Premier League game at home to Everton. "Then everything was completely out of control and the world reacted in a really unified manner.

"I didn't really have time to think about it, reflect, evaluate or anything because by the time it was out, a big tsunami already came on to it and basically killed it."

The Spaniard added Arsenal's owner Stan Kroenke, CEO Vinai Venkatesham and other figures at the London club involved in the Super League plan had apologised to the players and himself.

"All of them... (accept)... that the way it's been handled has had terrible consequences and that it was a mistake," Arteta said.

"Speaking for myself and I think the players, staff, everybody working at the club, we have to accept that and move on. The way it's been handled has been really good internally."

Arsenal, who are ninth in the table, one place and three points below Everton who have a game in hand, will be missing their leading strikers Pierre-Emerick Aubameyang (malaria) and Alexandre Lacazette (hamstring).

With defenders David Luiz and Kieran Tierney also out with knee problems, Arteta is hoping his side can pull off a morale-boosting victory without adding to their injury list.

"We had so many injuries in recent weeks that put the team in a difficult position but the other players are reacting well, the team is performing well and let's go and win," he said.

"That is the best medicine, always, for everything that happens: win football matches." 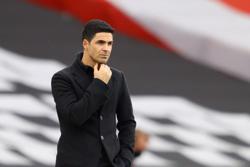