BIRMINGHAM, England (Reuters) - Manchester City are three wins away from a third Premier League title in four years thanks to a 2-1 win at Aston Villa on Wednesday, with the sending-off of Villa defender Matty Cash in the second half proving crucial.

City had hit back from conceding a goal after 20 seconds to lead 2-1 before defender John Stones was sent off before the break, but Cash's two quick yellow cards allowed the visitors to coast to victory.

"We played so good. After 10 against 11, and after Cash was sent off, it was a really good performance. The Premier League is the most important title to win," City coach Pep Guardiola told Sky Sports.

"We controlled the game when it was 10 against 10. It (Stones's tackle on Jacob Ramsey) was late but the intention was no. Now because we have won I am happy. If we had lost I'd be unhappy," he added.

Villa manager Dean Smith was left exasperated by the red card for his defender, with his side struggling to hold on to the ball for the remainder of the game.

"Matty Cash's first yellow was harsh, but the second one was just stupid and reckless - with them having 10 men, you won't get a better chance to beat City," he told Sky Sports.

"Our plan was to get it out to the front two and get behind, but we never got behind them enough. We got a few crosses in early on, but once we had the man sent off the halftime plan goes out the window," Smith said.

Villa remained 11th in the table on 44 points while City top the standings on 77 points, 11 ahead of Manchester United with five league games left. United have six matches to play. 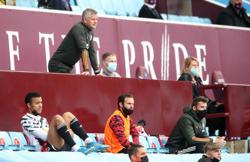