FILE PHOTO: The AC Milan logo is pictured on a pennant in a soccer store in downtown Milan, Italy April 29, 2015. REUTERS/Stefano Rellandini/File Photo

"The voices and the concerns of fans around the world have clearly been expressed about the Super League, and AC Milan must be sensitive to the voice of those who love this wonderful sport," the Serie A club said in a statement.

"We will continue to work hard to deliver a sustainable model for football."

Inter said earlier that they were no longer part of the project.

Milan were one of three Italian clubs among 12 founding members announced on Sunday but the plan fell apart when the six English Premier League clubs involved withdrew on Tuesday.

Juventus boss Andrea Agnelli told Reuters on Wednesday that the Super League, whose founding members would not have been exposed to relegation, could no longer proceed.

The clubs came under massive pressure from inside the sport and society at large, with politicians and even British royals adding their voices in opposition.

AC Milan chief executive Ivan Gazidis had said on Tuesday that the proposed breakaway, a rival to the UEFA Champions League, would be good for the club and for whole of football.

Milan said in their statement they had accepted the invitation to participate "with the genuine intention to deliver the best possible European competition for football fans around the world and in the best interest of the club and our own fans.

"Change is not always easy, but evolution is necessary for progress, and the structures of European football have evolved and changed over the decades," it added. 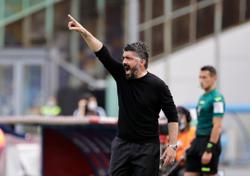