(Reuters) - The following are highlights from UEFA president Aleksander Ceferin's speech to UEFA's congress in Montreux, Switzerland on Tuesday where he addressed the formation of a breakaway Super League by 12 top clubs from England, Spain and Italy.

"There has been a shift in recent years. A semantic and ideological shift. A shift that too often ignores what happens on the pitch, that ignores sporting merit. A shift that has to be stopped immediately.

"Champions League elimination for some is no longer a sporting failure, it is an industrial risk that some are no longer willing to take.

"The ultimate aim, for some, is no longer to decorate the club’s trophy cabinet with silverware, but to fill the bank account with cash. Selfishness is replacing solidarity.

"Football does not belong to anyone. Or rather, it belongs to everyone, because football is part of our heritage.

"Where were Manchester United in the decade before Sir Alex arrived on the scene? And where were Juventus 15 years ago? As much as I know, they were in Serie B.

"What matters is that there is still time to change your mind. English fans deserve to have you correct your mistake.

"In times of crisis, human beings can choose between two options: self-interest or solidarity. You have chosen solidarity together. A choice that will enable us to emerge stronger from this crisis, and make football stronger than ever." 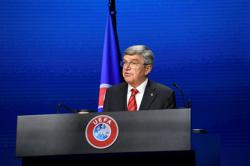