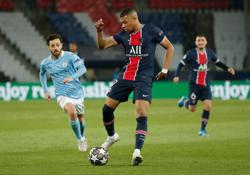 PARIS (Reuters) -Paris St Germain stayed in the hunt for a fourth successive Ligue 1 title after Mauro Icardi scored in the dying seconds of stoppage time to secure a dramatic 3-2 home win over St Etienne on Sunday.

Icardi headed home a cross from fellow substitute Angel Di Maria to cap a frantic climax after the visitors took a 78th-minute lead and then levelled in the first minute of added time after Kylian Mbappe had turned the game PSG's way.

The result left PSG second in the standings on 69 points from 33 games, one behind leaders Lille who were held to a 1-1 draw by eighth-placed Montpellier on Friday.

"The most important thing is to show character and never give up, always keep fighting and believing that you can get the three points," he said.

"We are all very happy and it was a good performance. I think we deserved to win but we suffered and it was a very emotional finale."

Looking weary from Tuesday's 1-0 home defeat by Bayern Munich which sent them through to the Champions League semi-finals on away goals, PSG struggled and missed chances against a packed St Etienne defence.

Mbappe was off target three times and Pablo Sarabia hit the post with a free kick before the visitors punished the home side's profligacy as Denis Bouanga superbly steered in a Miguel Trauco cross from the left.

Mbappe equalised 30 seconds later with a deft finish from close range after controlling a lofted Ander Herrera pass and the France forward fired PSG ahead with an 87th-minute penalty after he was brought down by goalkeeper Etienne Green.

The home side's joy was short-lived, however, as Romain Hamouma levelled with a tap-in from two metres after PSG keeper Sergio Rico failed to deal with Bouanga's shot from the edge of the penalty area.

It looked like it was not going to be PSG's day when Di Maria rattled the post with an inswinging corner but the Argentine curled in a cross from the right moments later for Icardi to head home.

Third-placed AS Monaco, who are five points behind Lille, visit 16th-placed Girondins Bordeaux while Olympique Lyonnais, a further point adrift in fourth, take on second-bottom Nantes away later on Sunday.