Rodgers backs Leicester trio to move on from COVID-19 breach 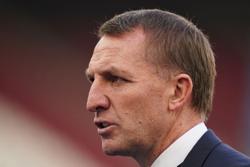 (Reuters) - Leicester City's Ayoze Perez, James Maddison and Hamza Choudhury have turned the page on their COVID-19 breach and are determined to produce strong performances on the pitch to restore their reputations, manager Brendan Rodgers said on Friday.

British media reported that Maddison and Choudhury had attended a party at Perez's house following a 2-0 Premier League defeat by Manchester City and the trio were subsequently left out of Sunday's 3-2 loss at West Ham United.

However, all three players are available for Sunday's FA Cup semi-final against Southampton at Wembley - Leicester's first appearance in the last four of football's oldest knockout competition since 1982.

"The players were bitterly disappointed," Rodgers told a news conference. "They knew they overstepped the mark... We all make mistakes. They were punished and we have to move on.

"It's a really exciting period. They know they have to focus for the rest of the season... These guys have made a great contribution to us. We are in this position because of them.

"There will be a choice again, and hopefully they will make a better one. We always have to look forward and the best way they can do that is by their actions on the field."

Leicester, who have never won the trophy, are aiming to reach the FA Cup final for the first time since 1969 and Rodgers said his team were not overawed by the occasion.

"The magnitude of the game is clear," he added. "You don't need to shine a torch on it anymore. We want to arrive in the final but we can only do that by performing well. If you get too nervous, it can immobilise you.

"I've been made aware of the history, losing four finals, that gives me a greater motivation."