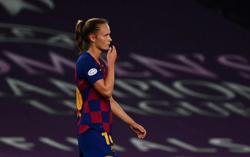 (Reuters) - Australian striker Sam Kerr is relishing life under new Matildas coach Tony Gustavsson as she and her team mates gear up for the women's football tournament at this summer's Olympic Games.

Matildas captain Kerr, winner of Asia's Women's Player of the Year award in 2017, has embraced the Swedish coach's approach as the Australians prepare to play their first game under the new tactician.

"That's music to my ears.

"It seems to me it's going to be about how we get the ball in the back of the net. I think that's really exciting and it's going to take time to get used to as we've come from a really big football playing style."

The Australians have travelled to face Germany on Saturday evening in their first game in over a year as they begin their preparations for the Olympics in Japan.

The Matildas secured their spot for the Games last year with a playoff win over Vietnam but, because of the ongoing COVID-19 pandemic, the team has not played since.

That means Gustavsson has not worked with his players since being appointed in September last year, when he took over from Ante Milicic.

But even in the short time working with Gustavsson, Kerr has noted a change in perspective.

"It doesn't matter if you're an attacker or defender, it's about everyone getting in a position to score a goal," she said.

"Of course us attackers will have more and more chances so with that comes a little bit more pressure to score more goals.

"I don't think there's more pressure on anyone in particular. I just think it's that the team expects more goals and expects more quality up front."

Kerr has been in a rich vein of form in recent months, scoring a league-leading 17 times Chelsea this season after enduring a difficult start to her time in the Women's Super League.

"I have had to find a balance between having new skills and look on the way I play and keeping what I am good at," Kerr said.

"I knew I was fast but now I know how to use that speed to my advantage and really get at defenders and really scare them."