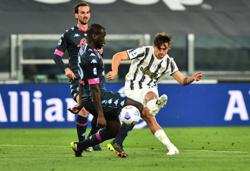 (Reuters) - Sassuolo earned a 3-3 draw against Napoli with the final kick of the game on Wednesday as Francesco Caputo’s penalty rescued a point for the hosts five minutes after Lorenzo Insigne thought he had won the game for the visitors with a late spot kick of his own.

Napoli twice fought back from behind at the Mapei Stadium before both sides scored penalties in an eventful finale, leaving the visitors with a result that extends their poor recent run of form.

Gennaro Gattuso’s side have picked up seven points in their last five league matches and were knocked out of the Europa League by Spanish side Granada last week.

The draw lifts them above AS Roma into fifth place in Serie A, despite the teams being level on 44 points, although the capital club face Fiorentina later on Wednesday. Sassuolo are eighth with 36 points.

Nikola Maksimovic nodded a free kick into his own net after 34 minutes to put the hosts in front after Lorenzo Insigne’s superb curling effort was ruled out for offside, but Piotr Zielinski guided a shot into the bottom corner to draw Napoli level four minutes later.

A Domenico Berardi penalty restored Sassuolo's lead in first-half stoppage time and Roberto De Zerbi’s side were agonisingly close to extending their advantage after the break when Berardi’s curling effort rattled the bar and Caputo fired a shot off the post.

They were punished when Giovanni Di Lorenzo volleyed in the equaliser from close range, and Sassuolo goalkeeper Andrea Consigli was forced into a one-handed reaction save to stop Fabian Ruiz from turning the game on its head.

There was late drama when Sassuolo substitute Lukas Haraslin brought down Di Lorenzo for Insigne to convert a penalty in the final minute of regulation time, but Haraslin made amends by winning his side a spot kick that Caputo dispatched before the fulltime whistle was blown.