PETALING JAYA: The fans are the real MVPs!

Since the inception of the National Football Awards in 2009, players have been receiving the most valuable player (MVP) award, but this year, the Malaysian Football League (MFL) have awarded it to the fans, who have stood by Malaysian football even during the pandemic period.

The award was announced during the virtual award ceremony, which was aired on MFL’s Facebook page and YouTube channel on Wednesday (Dec 30).

According to MFL, the supporters have been following the development of the Malaysian League closely even though they are not allowed to enter the stadium due to the MCO since March.

It was no surprise to see JDT dominating the awards as the Super League champions won five awards.

Former Perak striker Shahrel Fikri Md Fauzi was one of the biggest winners as the new Selangor signing bagged the best striker award and the top local goalscorer award with ten goals. 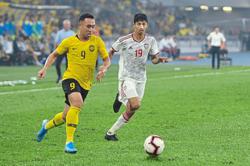