Flashback: Our report on Sept 5.

PETALING JAYA: Former football great Datuk Namat Abdullah (pic) had hoped to attend a reunion with his 1972 Munich Olympic Games teammates but it was not meant to be.

The 74-year-old passed away yesterday after a long bout with intestinal cancer.

Following a report in The Star over his wish to meet up with his Olympics teammates on Sept 5, the Football Association of Malaysia (FAM) president Datuk Hamidin Mohd Amin had promised to set up the long-awaited reunion but it had to be delayed because of the Covid-19 pandemic.

Namat died at his son-in-law’s residence in Taiping at 5.30pm, leaving behind wife Datin Mahani Sulaiman, seven children and 16 grandchildren.

The funeral will be held at his hometown in Sungai Petani today.

Even during his battle with cancer, Namat always had a smile upon seeing fellow footballers.

Former international Dollah Salleh and other footballers had paid Namat a visit in September and remembered vividly how jovial he was.

“We had so much fun when we met him three months ago. Even his wife said that he had not laughed that much in a while. It was nice seeing him happy and laughing, but God has his ways, ” said Dollah.

“Malaysia has lost a legend, and I feel sad.

“Even though our age gap is almost 20 years, but we were so close. I remembered playing with him in a veterans’ match ten years ago in Singapore.

“We played the Singapore XI and beat them 1-0. I was the youngest in the veteran’s team.

“Namat was his usual disciplined self and was the only player who tucked in his jersey. It says so much about his personality.

“In my eyes, no on can replace him. It’s a huge loss to the nation. I pray that his loved ones would stay strong and patient during this challenging time.”

Namat’s 1972 Olympics teammate goalkeeper Wong Kam Fook, who also caught up with Namat three months ago, was saddened by the news.

“I was a young goalkeeper during that period and Namat was always there to push and guide me. He was a responsible person and his discipline was second to none, ” said Kam Fook.

“He was willing to go through pain and injury because he was very resilient. We always respected him for that.

“Those days, we only met during the Malaysia Cup tournament and the national centralised training camp but yet, we were so united. We respected each other and that was what made us powerful.”

Namat is the third 1972 Olympian to have passed away this year. V. Krishnasamy died at the age of 72 in August followed by Datuk Mohamad Bakar last month.

The team made heads turn when they held hosts Germany, who had big names like Ottmar Hitzfeld and Uli Hoeness, for almost an hour before losing 0-3.

The team, coached by Jalil Che Din, eventually finished third in their group – they beat the United States 3-0 but lost 6-0 to Morocco.

It was the only time a Malaysian football team had played in the Olympics. Malaysia also qualified for the 1980 Olympics in Moscow but did not go because of a boycott.

Namat also won the 1973 Merdeka tournament and helped Malaysia to the bronze medal in the 1974 Teheran Asian Games.

Namat, together with brother Datuk Shaharuddin Abdullah, worked for Penang Prisons Department and were revered figures in the Island’s football team. 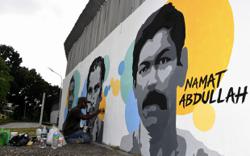