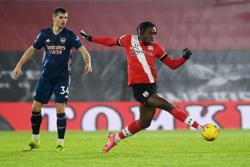 LEEDS, England (Reuters) - With 2,000 fans allowed back into stadiums in Tier 2 locations in England, soccer clubs have the unenviable task of trying to decide which supporters get a golden ticket this Christmas.

It was the news fans were waiting for as they wondered which tier their area of the country would be in after the national lockdown ends on Wednesday as, among other things, it would determine how many would be able to return to each stadium.

No Premier or Football League clubs fall into Tier 1 of the government's new system, while 10 of the country's top flight clubs cannot welcome any fans back at all after finding themselves in the most restrictive Tier 3.

However, 10 Premier League clubs and 34 Football League teams can have 2,000 fans for each match from next week. The problem is how to distribute the limited number of tickets.

The first game involving a Premier League club with fans in attendance will be Arsenal's Europa League clash with Rapid Vienna next Thursday, with the club confirming tickets will be available on a "first come, first served" priority sale.

Chelsea and West Ham United, both under London Tier 2 restrictions, are at home on Saturday Dec. 5 but have yet to announce their ticketing policy.

Liverpool is another area that benefits from being in Tier 2, with the club able to host fans against Wolverhampton Wanderers on Sunday Dec. 6.

Only season ticket holders or members with sufficient credits, from the Liverpool City region, will be allowed to apply for 75% of the 2,000 tickets, with the rest going to hospitality and to meet other contractual obligations.

Meanwhile, in the world of rugby, the governing RFU has said that 400 of the tickets for England's final Autumn Nations Cup match will be given free to local NHS workers.

Around 600 will be for players' families, local rugby clubs and sponsors and around 1,000 seats will be on sale to debenture holders, local residents and England supporters club members.

Two thousand may seem like a disappointingly low number of fans being allowed to return, but that will be reduced a lot further at League Two (fourth-tier) side Harrogate Town.

One of only four northern Tier 2 Football League sides, Harrogate are considering asking fans to bring ID and proof of address to make sure they are not based in one of the many surrounding Tier 3 areas.

Fans expecting anything like a normal festive day out are in for a rude awakening.

Liverpool are advising ticketed fans to get a COVID-19 test, while Liverpool Director of Public Health, Matthew Ashton, also called for supporters to make testing part of their routine before going to matches.

Tottenham Hotspur, who can have fans back for the north London derby against Arsenal on Dec. 6, have announced what the fortunate few can expect on a match day, and it sounds like a far cry from leisurely a pie and a pint.

There will be timed entry of fans to avoid congestion at the turnstiles and outside the stadium plus enhanced cleaning measures -- including infection control fogging, electrostatic spraying and disinfecting -- before, during and after the game.

Food consumed at the ground will be click and collect, via the Spurs official app, reducing the need to queue. 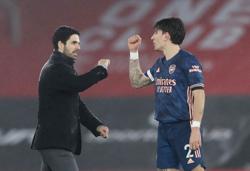