SAINT PETERSBURG, Russia (Reuters) - Club Brugge made a perfect start to their Champions League Group F campaign after a stoppage time goal by Charles De Ketelaere gave them a 2-1 win at Zenit St Petersburg on Tuesday.

After a drab first half, Emmanuel Bonaventure fired the visitors ahead in the 63rd minute when he swept in a rebound from two metres after Yaroslav Rakitskyy twice cleared close-range efforts by De Ketelaere off the line.

Sebastian Driussi missed a gilt-edged opportunity to equalise when he blazed a shot over the bar from 10 metres before the home side levelled thanks to a freakish own goal by visiting goalkeeper Ethan Horvath in the 74th minute.

Former Liverpool defender Dejan Lovren hit the post with a screamer from 30 metres for Zenit and the ball cannoned off the keeper's back into the net.

Horvath kept out an Artem Dzyuba sitter and palmed away Wendel's long-range effort in the closing stages before 19-year old forward De Ketelaere silenced the home fans in the Gazprom Arena deep into stoppage time.

Midfielder Ruud Vormer beat the offside trap and squared the ball to De Ketelaere who capped a fine individual performance with a simple tap-in past the home team's stranded goalkeeper Mikhail Kerzhakov.

Lazio were at home to Borussia Dortmund in the other game in the group, kicking off at 1900 GMT. 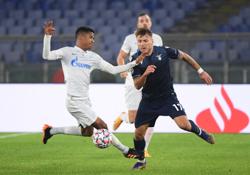