Mainz players back in training after dispute over Szalai suspension

BERLIN (Reuters) - Mainz 05 players returned to training on Thursday after refusing to do so on Wednesday afternoon over the Bundesliga club's decision to suspend forward Adam Szalai.

Mainz said in a news conference it had informed the Hungary forward, who played for Mainz from 2010-13 and returned again last year, of their intention on Monday that he should start looking for a new club.

The players then refused to train on Wednesday afternoon in solidarity with Szalai.

"The fact that the team did not come to training is a very uncomfortable situation," club sports director Rouven Schroeder told a news conference on Thursday. "It is definitely an escalation, no need to talk around things. But it happened and we have to deal with it."

"The issue of Adam Szalai was the reason the team did not train," he explained, adding the decision was purely a sporting one and not related to any financial issue.

Schroeder said the incident had already triggered consequences following a discussion on Thursday morning with the players' council, but did not provide any details.

"The incidents are not gone instantly. We discussed the matted and issued the consequences. We need to keep working at it but it is the wish of the team and the club to keep some thing internally," he said.

Mainz coach Achim Beierlorzer told a news conference on Thursday he understood the players' solidarity towards their team mate but refusal to train was a completely different matter.

"I can understand that the team hold together and deliver a statement," Beierlorzer told a news conference. "But I have no understanding that this interferes with training because this means performances and preparation."

He said his ties to the team had not been affected by this. 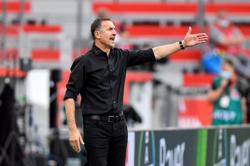