It’s back to Belgium for Luqman

PETALING JAYA: National Under-19 striker Luqman Hakim Shamsuddin (pic) will be linking up with Belgian top side KV Kortrijk after all.

The Kelantan-born Luqman was supposed to train with Cardiff City in February before joining Kortrijk in March but visa issues and the movement control order (MCO) saw him joining Selangor II in the Premier League.

However, with the league suspended, he has not played a single match for Selangor II and it’s back to Belgium for him.

The Football Association of Selangor (FAS) said Luqman will be flying off to Belgium as soon as his documentation has been processed and cleared.

“At FAS, we understand the importance of nurturing talents for Malaysian football. We strive to provide the opportunities necessary to help elevate these young players’ careers. The state has witnessed the emergence of various success stories that also underlines the club’s commitment to this cause,” read an FAS statement.

“Unearthing the potential these players possess requires not only physical training to polish up skills and ability on the pitch. We understand that values in life also play a pivotal role in shaping their maturity and character off the pitch.

“FAS would like to wish Luqman all the best. We sincerely hope this move will not only benefit him as an individual but also, in the long run, help the local footballing industry progress further. We hope this will open the door to more young talents going abroad.”

It is learned that Kortrijk will make an official request from the Malaysian government to allow Luqman to fly to Belgium.

At the moment, the Malaysian government limits the number of flights out of the country due to the Covid-19 pandemic. Luqman: I’m no flash in the pan 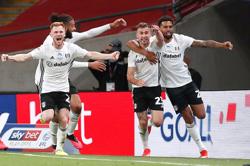