PETALING JAYA: Coach Aidil Sharin (pic) is finally back in Kedah and faces an unenviable task to whip up a team for the restart of the Super League.

The Singaporean coach returned to the island republic following the movement control order in March.

After three months of monitoring his players’ home training programmes online, the 42-year-old coach will now be able to conduct the training today after arriving in Kedah yesterday.

And Aidil will have his work cut out to prepare a team for the Sept 1 restart.

Morale among the players are currently at an all-time low following the non-payment of salaries for nearly five months.

Their leftback Azmeer Yusof has quit the team to focus on his business venture and it leaves a big hole in their defence.

“We are not in an ideal situation. Azmeer was a regular and he will be missed. But we do have other options in Zulkhairi (Zulkeply), Norfiqrie (Talib) and Alif (Yusof).

“It’s time for the second stringers to step up and earn a regular spot in the team, ” said Aidil.

“We have issues with salary and I hope it will be resolved soon. For sure, the players’ morale are affected. I will look at the positive side and try to get them motivated.

“We must keep in mind that we are all fighting for our future. We are in a tough situation but we must keep going forward.”

Meanwhile, the former Home United midfielder admitted he missed the action on the pitch and is looking forward to linking up with his players at the Darulaman Stadium.

“After three months, I could finally conduct the training personally. The squad started their non-contact training on Wednesday, ” said Aidil, who guided Kedah to the FA Cup crown last year.

“I’m really glad to finally be allowed to cross the border. I’ll definitely miss my family after being with them for three months, I guess it’s back to video calls then.” 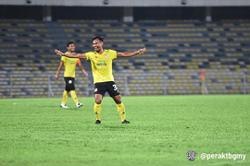 Fearless Farid believes his time with Perak is... now 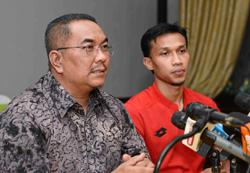