(Reuters) - Liverpool manager Juergen Klopp dedicated their first English league triumph in 30 years to the fans and also took a moment to recognise the part played by former players and managers in building the club.

Manchester City's 2-1 defeat by Chelsea on Thursday gave Liverpool an unassailable 23-point lead with seven Premier League games remaining and the team celebrated at a hotel on Merseyside.

"My message is: it's for you out there ... I hope you feel it," Klopp told the fans on Liverpool's website https://www.liverpoolfc.com/news/first-team/399910-jurgen-klopp-premier-league-title-winners-interview.

"It's for so many people. Kenny Dalglish and Graeme Souness spoke to me ... they were very positive. That's nice but it's thanks to them because this club is built on what they did.

"It's built ... on (Bill) Shankly, (Bob) Paisley and (Joe) Fagan and all the others, but on these players... Steven Gerrard -- this club's built on, in the last 20 years, on Stevie's legs. He had to carry all the pressure. He did that exceptionally.

Klopp said he had made sure everyone watched the match together.

"There was no alternative... we thought about it, shall we do something and then we thought maybe not compulsory, the boys have to drive a bit," Klopp added.

"Then I said, 'no, we have to make it compulsory, everybody has to be there,' because I'm more experienced... I know who will stay at home and watch it alone will regret it for the rest of his life." 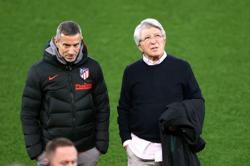 If you don't like it buy your own club, says Atletico chief after European exit