PETALING JAYA: It is hoped that under the new 2020 Budget announced recently, the National Football Development Programme (NFDP) will produce more players in the stature of Luqman Hakim Shamsudin.

On Friday, British newspaper The Guardian listed the 17-year-old as one of the world’s 60 best young footballers for 2019.

“I am very pleased as this is something we have been struggling with before. Initially, the NFDP were given RM3.5mil and the amount was then raised to RM15mil but for next year, we’ll get RM45mil, a three-fold increase, ” said Syed Saddiq.

“This will have a big impact on over 80,000 young players, especially in rural areas to be included in the football ecosystem. We want to give birth to more Luqmans, so we need more big and strategic investments.”

Luqman is among six Asian players deemed good enough to make the Guardian list this year.

Luqman, who was the joint top scorer at the 2018 Asian Under-16 championship, caught the eyes of a number of Japanese clubs but was snapped up by Belgium’s K.V. Kortrijk in September.

He will sign with them when he turns 18 in March 2020. Before moving to Belgium, he will attend a three-month training stint with Cardiff City, another club owned by Tan Sri Vincent.

“We are proud to have Luqman in the list but he must remain focused on the long-term goal, to show his true potential at senior level, ” said Stuart.

“We hope Luqman is the start of many more to come. Malaysia has always seen great talents and we see a great number of quality boys coming through the system.

“We hope the step up from youth talents to professional elite athletes is sustained.” 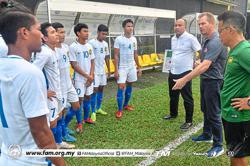 Overseas-based Adam and Kuzri selected for U-19 squad FIFA’s huge grant no help for teams in M-League