That’s mine: Kuala Lumpur’s Zaiful Abdul Hakim (front) vying for the ball with Perak’s Nor Hakim Hassan during the Super League match at the Cheras Football Stadium on Tuesday. — Bernama

PETALING JAYA: Ten matches into the Super League and Perak coach Mehmet Durakovic admits his men are still on the learning curve after they chalked up their seventh draw of the season.

The Malaysia Cup winners were held 3-3 by relegation battlers Kuala Lumpur at the Cheras Football Stadium on Tuesday. Both teams were also reduced to 10 men after their players were sent off.

Kuala Lumpur were down to 10 men after Luke Woodland was shown the red card in the 57th minute, while Perak’s Nazirul Naim Che Hashim was sent off after picking up his second booking in the 64th minute.

“Three mistakes, and we conceded three goals – we need to learn not to make mistakes. Full credit to Kuala Lumpur because they played OK,” said the Australian coach.

“We got a point but it should have been three. We made mistakes and players will have to learn from it.

“We gifted the goals but we’re starting to score as well, so that’s good.

“We’ll go back to Ipoh and see who’s available for the next game.”

Perak are now eighth in the 12-team Super League table with 10 points after a win, seven draws and two defeats.

KL moved one rung from the bottom after the draw with Perak and have eight points, above Felda United who are last with seven points.

“I’m very happy with the players’ approach to the game, they showed hunger and the will to win. Unfortunately, we caved in in the last five minutes,” said Yee Fatt.

“I might have been happy with a point last month but this time, I feel that we lost the full points from this game.”

“Our mindset is to take it one game at a time – the boys have promised to end April with a bang.” 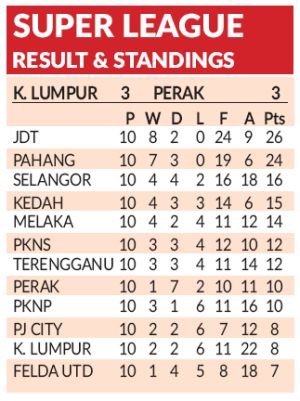