SHAH ALAM: Selangor notched their second victory of the season by beating Terengganu 1-0 at the Shah Alam Stadium on Friday (March 29).

The first half proved to be an insipid affair as both teams tried to find their rhythm.

The closest any side came to scoring was in the 14th minute when Terengganu's Sanjaar Shaakhmedov unleashed a thumping shot from outside the box, which went wide.

After the break, the climate of the match changed.

In the 49th minute, Terengganu should have taken the lead when leftback Adib Aizuddin threaded an inch-perfect pass to Lee Tuck but the midfielder muffed his chance.

A minute later, Ashaari Shamsudin was unlucky as his shot inside the box hit the post.

The two close shaves seemed woke Selangor up and they got their reward in the 56th when a brilliant interchange of passes between Abdul Halim Saari and K. Prabakaran found diminutive midfielder Faiz Nasir, who had the easiest of tasks by tapping the ball pass Terengganu goalkeeper Suffian Abdul Rahman.

The goal boosted their confidence and they created several good chances but the scoreline stayed 1-0 as Selangor notched their second win of the season.

In the other matches, Kedah were held 1-1 by Johor Darul Ta'zim (JDT) at the Darulaman Stadium while it was a goalless affair between Melaka and Perak at the Hang Jebat Stadium. 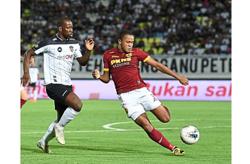 Fazly eager to improve his career with Elephants No jumbo task to play for the Elephants again