Late King goal lifts Bournemouth into the top half

(Reuters) - Bournemouth climbed into the top half of the Premier League after Joshua King's late goal sealed a 2-1 victory against Burnley on Saturday.

On the sun-kissed south coast, Bournemouth opened the scoring when former Burnley winger Junior Stanislas brilliantly controlled a long ball with his chest before sliding a cute finish into the corner in the 25th minute.

Burnley, who have claimed just seven points away from home all season, equalised against the run of play through Sam Vokes' 83rd-minute header but, with a draw beckoning, King netted his 16th league goal of the season two minutes later to seal a deserved win.

Bournemouth -- whose previous highest top-flight finish was 16th a year ago -- sit 10th with 45 points from 37 games. Burnley, meanwhile, are five points behind them in 14th. 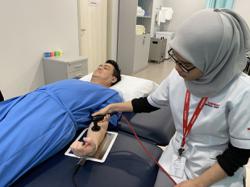