PETALING JAYA: The Youth and Sports Ministry, National Sports Council (NSC) and Malaysia Swimming must combine forces to come up with effective strategies to make diving a medal contributor again in future Olympics.

Despite the best efforts from the divers, none made the podium for the first time since the 2008 Beijing Games.

Malaysian sports fans who follow diving over the years must be wondering whether there are new talents good enough to be groomed for the next Olympics in Paris, which is only three years away.

To her credit, Pandelela Rinong tried her best but it became an impossible task after she over-rotated in the first dive and ended up getting 18.00 points in the women’s individual 10m platform final on Thursday.

Pandelela, who had contributed one bronze and one silver from 2012 London and 2016 Rio de Janeiro, will return home empty-handed from Tokyo this time.

She will be 31 at the 2024 Paris Games and the question is, who will be her partner in the women’s 10m platform synchro as seniors like Leong Mun Yee and Cheong Jun Hoong would no longer be around.

The women’s 10m platform synchro event is still the best medal prospect for Malaysia in Olympics as only eight pairs from eight nations will contest the final compared to the individual event where each country can field two divers.

Nur Dhabitah Sabri, who finished fourth in the women’s individual 3m springboard will be 25 in Paris while Wendy Ng Yan Yee should be around too – but are there other potential stars?

NSC director general Datuk Ahmad Shapawi Ismail accepted the fact that the diving team failed in their mission to contribute an Olympic medal.

“There are several factors that have affected our preparations,” said Shapawi.

“All of us, including athletes from abroad, went through a difficult and uncertain situation caused by the Covid-19 pandemic.

“We didn’t know the status of the Olympics even months before the Games. Previously planned competitions including the qualifying competition, were postponed and affected the planning.

“There were also changes in the competition schedule, eligibility requirements, the closing of borders of our country and foreign countries apart from the quarantine rules that also affected the implementation of the programme.

“All athletes around the world faced the same situation and the ones quicker to adapt to the unusual conditions had more advantage.

“We will review diving comprehensively by obtaining input from athletes, coaches and national sports associations as well as using existing platforms like the Podium Programme Steering Committee and the Road to Tokyo programme to evaluate.

“But no doubt, we could have done better,” he said.

Jun Hoong and Wendy also failed to get past the preliminaries in their respective individual pet events.

Jun Hoong’s confidence was shaken after scoring low marks in the first two dives of the women’s individual 10m platform and eventually finished 26th while Wendy only managed 20th spot in the individual 3m springboard.

She was a finalist in Rio in the event. 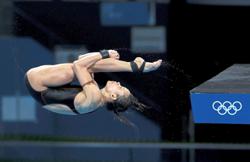