The 28-year-old accumulated 315.75 points from five dives to finish seventh in the semi-finals at the Tokyo Aquatics Centre here.

Only the top 12 divers out of the 18 semi-finalists advanced to the final, which is scheduled to start at 3pm local time (2pm Malaysian time) later today.

Pandelela advanced to the semi-finals after finishing 18th in the preliminary round with 284.90 points on Wednesday (Aug 4) while compatriot Cheong Jun Hoong missed the top-18 cut after finishing 26th with 251.80 points.

Pandelela is the sole medal hopeful from the Malaysian diving camp after Pandelela-Leong Mun Yee came out last out of eight divers in the women’s 10m platform synchronised event on July 27, while Nur Dhabitah Sabri finished fourth in the women’s 3m springboard event on Sunday (Aug 1). 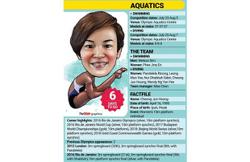