Pandelela Rinong gets off to a shaky start in the women's diving 10m platform preliminary in Tokyo. - AP

PETALING JAYA: It was not a good day for Malaysia in the diving pool as medal hope Pandelela Rinong sneaked through to the top 18 semi-finals of the women's individual 10m platform competition at Tokyo Aquatics Centre but it's over for Cheong Jun Hoong.

Pandelela made the cut as the last qualifier with her total of 284.90 points on Wednesday. Only the top 18 divers after the preliminaries get to compete in the semis.

The semi-finals will take place in the morning on Thursday and then, the top 12 will contest in the final in the afternoon.

Pandelela had to endure a nervous wait to see whether she could remain in the competition after only earning 28.80 for her fourth dive. It pushed her down to 20th spot with one dive to go.

It was at the same venue in May where Pandelela made history for Malaysia by winning the gold in the 10m platform individual at the World Cup.

It was, however, a sad day for Jun Hoong as she exited at the Olympics stage after finishing 26th with 251.80 points.

Jun Hoong struggled from the start to get her dives right and looked far from the form that saw her winning her a historic title at the World Championships in Budapest, Hungary four years ago.

Jun Hoong was also a silver medallist in the 10m platform synchro with Pandelela at the last Games in Rio de Janeiro in 2016. 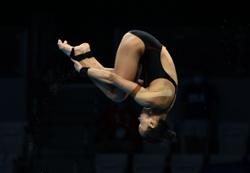