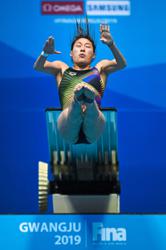 The contest saw the Malaysians making the plunge at the National Aquatic Centre in Bukit Jalil while their counterparts from Japan, Australia, New Zealand, and Singapore dived at their respective venues yesterday.

Each of the countries also had one judge to hand out the scores.

Compatriot Chew Yiwei let slip a golden chance to beat Tze Liang when he over-rotated in his second dive. But to his credit, he managed to fight back from fifth to end the six-dive competition in second spot with 365.60.

Mohd Syafiq Puteh was in third in the preliminaries but had to miss out as only two divers from each country go to the final.

Tze Liang, who will receive a certificate instead of a medal, was pleased with his performance.

“My last competition was in Germany in February. That was a long time ago so I’m quite happy with my efforts.

“Furthermore, this is a whole new experience for me.

“I made some mistakes but overall it’s okay. I just try to bring out what I’ve learnt in training these last few months.”

Tze Liang will be out to earn a second Olympic appearance when he competes in the Diving World Cup meet in Tokyo in April next year.

Meanwhile, Dhabitah was delighted that she executed her routine without any hiccups when she partnered Wendy to win the 3m springboard synchro with 298.98 points.

“It’s kind of strange with only two of us and no judges around but we managed to perform quite well, thanks to our teammates who made some noise to motivate and cheer on us, ” said Dhabitah.

Cheong Jun Hoong, competing for the first time since her knee surgery two years ago, missed out on the 10m platform final.

The 2017 world champion was placed fourth in the preliminaries with 237.05 points.