PETALING JAYA: The trials are off – and 10m platform diver Cheong Jun Hoong will now get her chance to secure a third Olympic appearance in Tokyo.

And it’s all thanks to the Covid-19 outbreak, and a big-hearted Pandelela Rinong who has agreed to skip the event at the FINA Diving World Cup in Tokyo next month.

The special trial at Bukit Jalil to decide whether Jun Hoong gets to compete in the World Cup has been called off because the international judges are unable to travel here.

The trial was supposed to take place on March 27 involving Pandelela, Nur Dhabitah Sabri and Jun Hoong but Amateur Swimming Union of Malaysia (Asum) secretary Mae Chen said the FINA judges are unable to commit because of the travel issues due to the ongoing Covid-19 outbreak.

“The judges are from countries like Thailand, Hong Kong, Macau and Europe.

“It’s a problem as they will have to serve a two-week quarantine period after returning home and they just can’t come because of the uncertainty now,” she said.

Mae then had a talk with Pandelela about pulling out of the women’s individual 10m platform and the diver readily agreed.

Pandelela already qualified for the event for the Olympics with her fifth placing in the individual event at the World Aquatics Championships in Gwangju, South Korea last year.

So, it will be now be between Jun Hoong and Dhabitah for the second qualifying spot for Malaysia in the individual platform. Dhabitah has also already qualified for the Olympics in the 3m springboard event.

The World Cup from April 21-26 is the last tournament offering qualifying spots for the Olympics.

“Pandelela agreed to just focus on the 10m platform synchro with Leong Mun Yee since she has already qualified for the individual.

“I thank her for giving her teammates an opportunity to to try and win the Olympic spot.”

The 29-year-old Jun Hoong is scheduled to wrap up her training in China in less than two weeks time and return home. She is the only Malaysian diver left in Dongguan, China and is training all alone at the facility.

Jun Hoong’s stint under former national coach Yang Zhuliang is a special arrangement made by National Sports Council (NSC) in a bid to get her to qualify for the Olympics.

Jun Hoong, a Rio Olympics silver medallist, has not competed in any tournament since June 2018 because of a long-standing knee problem. 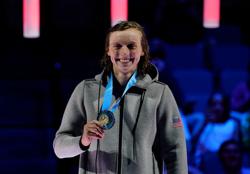