In a two-man sprint to the finish line in Manong, Perak, both cyclists finished the 165.2km race in 3’48:34 yesterday.

The 24-year-old Muhsin said he only thought of his teammates, who made sure he did not need to sprint in a group towards the end, after his success.

“It was a tough and gruelling race which I would not have won if there had been a bunch sprint towards the end. So, we pushed for a breakaway and positioned ourselves well,’’ said Muhsin, who won the individual time trial in the 2019 edition.

‘’I just gave my all and ensured I was able to beat Amirull in that finish. This was not just my win, it was also my mates.” 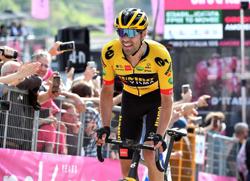