‘Ride’ behind you, brother! 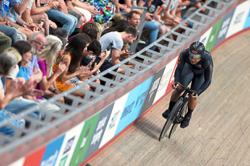 Ridwan Sahrom and elder brother Mohd Shah Firdaus Sahrom showing off their medals won after combining together for the first time in the men's elite team sprint with Fadhil Zonis in the Asian Track Cycling Championships in New Delhi.

PETALING JAYA: Mohd Ridwan Sahrom is following in the footsteps of his elder brother Mohd Shah Firdaus Sahrom in flying the flag for Malaysia in track cycling.

The 21-year-old earned his first international medal in the senior ranks when he combined with his Tokyo Olympian brother Shah Firdaus and Fadhil Zonis to take an unexpected silver in the men’s elite team sprint at the Asian Track Cycling Championships in New Delhi, India.

The Malaysian trio posted 44.363 seconds in the final to settle for second behind Japan’s Yuta Obara, Kaiya Ota and Yoshitaku Nagasako, who secured gold with 43.769.

It is the first silver for Malaysia in the elite team sprint since Arfy Qhairant, Farhan Amri Zaid and Mohd Edrus Yunos lost to China in the final of the 2013 edition in New Delhi.

Johor-born Ridwan must have been delighted to ride to silver as the third rider in the sprint team.

He was the next best choice in the absence of Olympic silver medallist Azizulhasni Awang, who has taken the whole year off to recover from corrective heart surgery.

Azizul, Shah Firdaus and Fadhil make up the team sprint combination where they took silver at the Asian Games in Indonesia in 2018.

Ridwan showed he was not far off the seniors at the recent National Track Championships in Nilai in winning one silver (1km time trial) and two bronzes (sprint and keirin).

Only Fadhil and Shah Firdaus were better than Ridwan in the individual events.

Malaysia also got another silver through the women’s junior team sprint combination of Azwa Nabila, Nyo Ci Hui and Yong Ann Tung. The trio clocked 52.979 for silver behind South Korea (52.449).

Lim Chun Kiat’s hopes to become the first ever Malaysian medal winner in the individual pursuit was dashed by India’s Vishwajit Singh in the ride for bronze.

Chun Kiat, the reigning national champion, made the medal rounds when he clocked the third fastest time of 4:31.130 ahead of Vishwajit (4:31.380) in the qualifying rounds.

His coach Louis Pang was proud of what his charge achieved in only his first international appearance.

“He made a tactical error and was caught up by the Indian cyclist on lap 12.

“I’m still very proud as he managed to make the individual pursuit finals at Asian level.

“There are areas we can improve on for sure after this,” said Louis.

All eyes will be on the men’s elite keirin event where Shah Firdaus and Fadhil will be hoping to make a career breakthrough at the Asian Championships in the absence of Azizul. 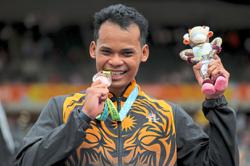 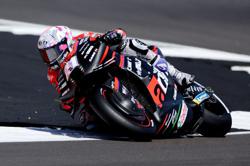