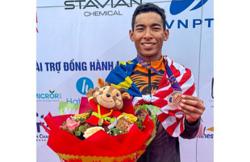 PETALING JAYA: There are early new year cheers for one of Asia’s biggest cycling road teams, thanks to new sponsorship and rebranding.

The Terengganu Polygon Cycling Team will look to the new season with much optimism after receiving sponsorship contributions to the tune of RM9.3mil.

Formerly known as the Terengganu Cycling Team, the team based in Kuala Terengganu and set up in 2011 have also signed two new imports in 24-year-old Jamal Hibatullah from Indonesia and 26-year-old Ukrainian Anatolii Budiak. Both are climb specialists.

“We want to become the No. 1 team in the UCI Asia Tour rankings again and also finish among the top three continental teams in the UCI World Tour this year.

“Our optimism is based on our level of preparation this year and the support of sponsors.

“The total amount of sponsorship we received in cash, kind and services is the biggest since the team were established in 2011.

“The rebranding of the team came after international bicycle brand Polygon, that has been based in Indonesia, became TSG’s main sponsor.

It will be a busy calendar for the team as they will open accounts with the Tour of Sharjah in the United Arab Emirates end of this month before the Tour of Rwanda the following month.

The team will then venture into Europe to take part in several races.