PETALING JAYA: Terengganu cycling team (TSG) continued to reap dividends in their maiden European campaign with Carlos Quintero clinching their second win in a row at the Velo Alanya Grand Prix in Turkey.

The Colombian all-rounder put on an attacking display in the closing stages of the one-day race to win the 103.5km event in 2’40:33.

It was certainly a fruitful week for the Kuala Terengganu-based team as top Malaysian sprinter Harrif Saleh had delivered their first win in the Grand Prix Velo Manavgat on Saturday.

Harrif was not fielded because the hilly terrain is more suited for climbers.

TSG’s Artem Ovechkin (Russia) was 12th while Youcef Reguigui of Algeria, Nur Aiman Zariff and Goh Choon Huat of Singapore finished out of the top 40.

Quintero was delighted as he had been eyeing a first win in TSG colours since he joined them in 2019.

“This is an unbelievable feeling, it’s hard to explain it with words, ” said the 34-year-old who has competed in the Giro d’Italia and the Vuelta a Espana with Colombia.

“It’s amazing. It is my first win with TSG. I have to thank the team for their support. Huge congratulations to everyone, ” he said.

TSG have already completed four of six UCI 1.2. races so far in Turkey. 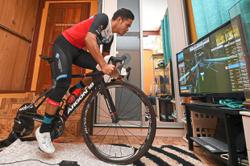 Cycling: Cavendish backs Jakobsen to return to best form after crash
Shah steals thunder from Azizul in Victorian keirin race
Not Jos-tling for it
Azizul and Shah Firdaus all set for ‘experimental’ outing
Giro d'Italia route should favour specialist climbers
Cycle of discovery
Azizul and Shah to get Covid-19 jabs in June
Cycling: Froome draws inspiration from NFL's Brady, eyes fifth Tour title
Harrif gets it ride in Turkey
You can’t lock him down