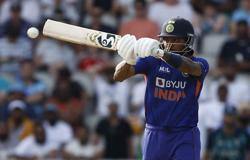 (Reuters) - India captain Hardik Pandya has backed Umran Malik to make his mark on the international stage despite the fast bowler's nervous debut in the Twenty20 series against Ireland.

Opener Deepak Hooda scored an unbeaten 47 on Sunday as India hunted down 109 runs to take a seven-wicket win in a match reduced to 12 overs a side due to rain.

Malik, who lit up this year's Indian Premier League and sent down three of the five fastest deliveries of the competition, marked his arrival in Malahide with a 92 mph (148 kph) thunderbolt but his only over cost 14 runs.

"When you play for India for the first time, and the journey he has taken, it's important to give such a bowler and such a talent time," said Pandya.

"Whether it was a good day or a bad day is irrelevant. For him, just to play for India is itself a very big thing, and that is something which I'm very happy for, (irrespective) of how the result went, good or bad, it's okay.

"I want to let him enjoy this moment because it doesn't come every time. A debut happens only once."

Ireland will host India in the second T20 of the two-match series on Tuesday in Malahide.