Aiman got back to winning ways last Friday after three rounds against Sunoto ‘The Terminator’ at the ONE Championship’s ONE: Dawn of Heroes event in Manila.

MALAYSIA’S Muhammad “Jungle Cat” Aiman got back to winning ways after three rounds against Indonesian veteran Sunoto “The Terminator” at ONE Championship’s ONE: Dawn of Heroes event in Manila,the Philippines last Friday.

The 24-year-old Malaysian hero looked sharp with his strikes and grappling defence as he shut down his rival’s attempts to turn the contest into a wrestling match and found a home for his quick punching combinations at the Mall Of Asia Arena in Manila.

Aiman remained a step ahead throughout the three-round bout as he outstruck and outgrappled Sunoto to walk away with the curtain-raising win.

Almost every blow that came from his opponent from IndoGym and Team Phantom MMA was returned with interest by Aiman.

The Malaysian fighter picked up the pace and increased the pressure in the final frame as he started to initiate the exchanges and land strikes in combination as he exploded forward. 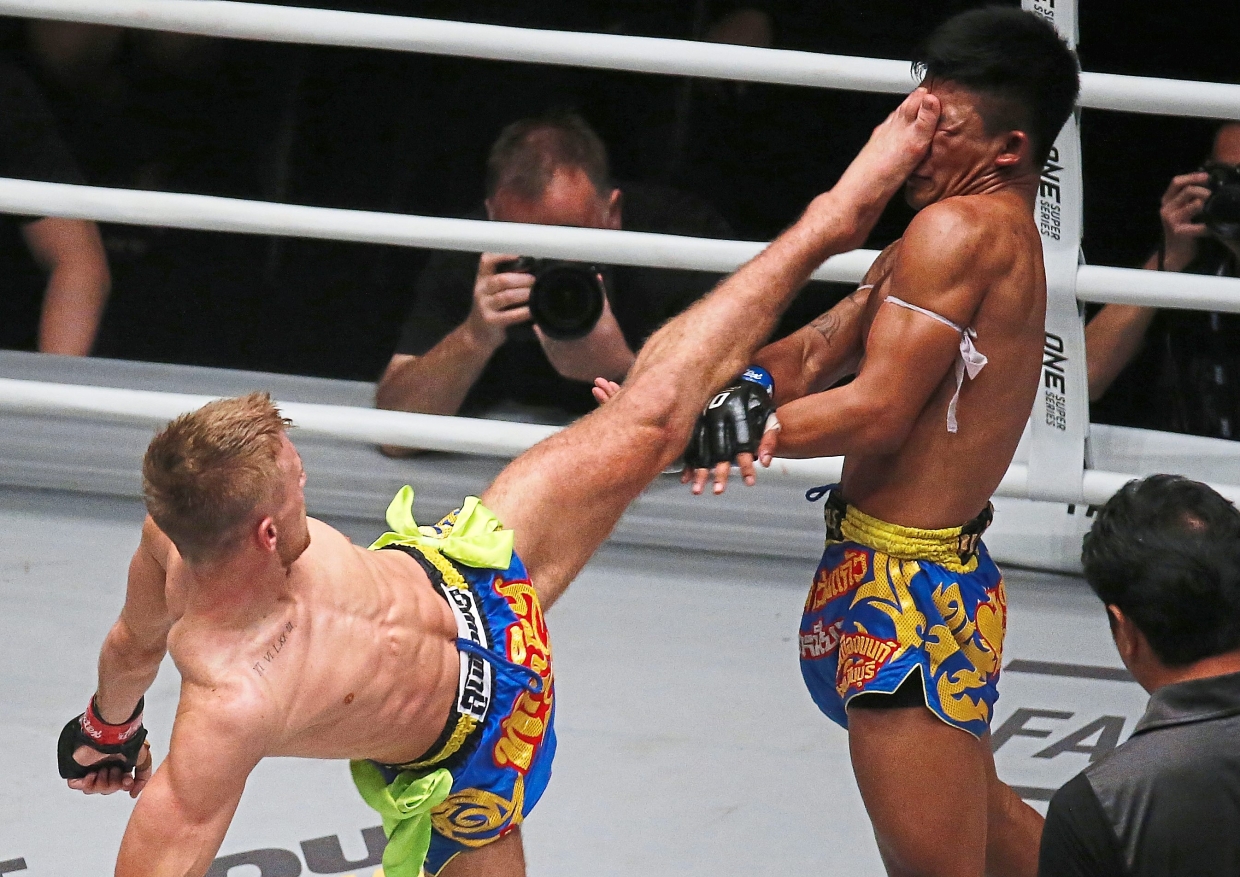 Haggerty (left) executing a kick to challenger Rodtang of Thailand during their encounter. Rodtang dethroned Haggerty via a unanimous decision.

The Bali MMA-trained athlete then jumped guard to attempt a guillotine choke when he was pushed into the corner of the ring,but he could not get the finish.

However,when he backed Sunoto against the ropes,he landed the most significant strikes of the match,including a big right hand that shook the man from Jakarta for a split second.

After 15 minutes,all three judges’ cards went to Aiman,which gave him the win by unanimous decision and improved his professional mixed martial arts record to 6-3.

Aiman made his professional debut with ONE Championship in September 2016. He has since registered wins over several tough opponents,including BJJ champion Eduardo Novaes. Nguyen (left) attacking challenger Koyomi Matsushima of Japan with a kick during their title fight. Nguyen retained his title for the third time via a stoppage in the second round.

Meanwhile,in the main event,Martin “The Situ-Asian” Nguyen of Australia and Vietnam continued his reign over the featherweight division with a second-round technical knockout victory over Japanese challenger Koyomi “Moushigo” Matsushima to retain the ONE Featherweight World Championship.

ONE Championship is the largest global sports media property in Asian history,and the largest producer of millennial live sports content in Asia.

It hosts bouts across all styles of martial arts such as Muay Thai,Kickboxing,Karate,Kung Fu,Silat,Sanda,Lethwei,Mixed Martial Arts,Tae Kwon Do and Submission Grappling.

In addition to its digital platforms,ONE Championship broadcasts to over 2.6 billion potential viewers across more than 140 countries with some of the largest global broadcasters.

Upbeat Man United face Everton
Acid test for the champions
Tricky tie for Reds at Leeds
Newcastle face wrath of CR7 as he takes centre stage this weekend on his return to Old Trafford
Gunners could come unstuck against sleek City side
Battle of two world beaters
Final day Europe cliffhanger
Blues won’t have it easy, Foxes can slay sorry Spurs
Man City can celebrate but race for Champions League spots will surely go down to the wire
Reds need to recover fast