The IFC and KB Veteran Sri Muda squads before their finals encounter, which IFC won on penalties.

IRC lived up to their pre-tournament favourites tag when they wrested the Douglas Webster challenge trophy and with it the US$600 (RM2,480) cash prize.

They defeated another Malaysian team – Kilat KL Club – by a solitary goal in the final. Kilat picked up US$400 (RM1,650) as runners-up.

It was the second meeting for the teams in the final, after having met in the opening match of the tournament when IFC had also won by a similar scoreline. 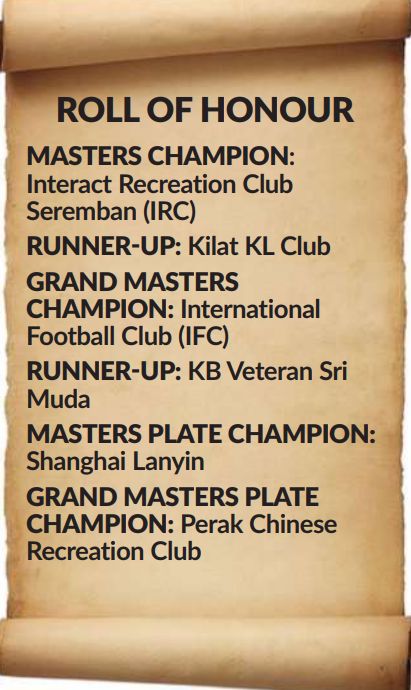 IRC, who completed their fixtures – five group matches, semifinals and final unbeaten – had to thank former national Olympics squad and Kuala Lumpur striker K. Nanthakumar, who scored a total of six goals – including the winner in the final.

IFC have been in existence for 13 years under the chairmanship of P. Ragunathan and have become an iconic veteran club with top class playing facilities at the IRC Arena at SRJK(T) Bandar Sri Sendayan in Seremban which houses their clubhouse and field, complete with floodlights.

The club has also adopted the school football team as a pilot community project. The president of the club now is former Asian Football Confederation secretary-general Datuk Alex Soosai.

Meanwhile, hosts IFC, won their first Grand Masters title of the tournament they have been hosting for the past 11 years.

IFC have been in existence for 51 years and is the only veteran club in Malaysia true to its name who takes its tournament overseas. 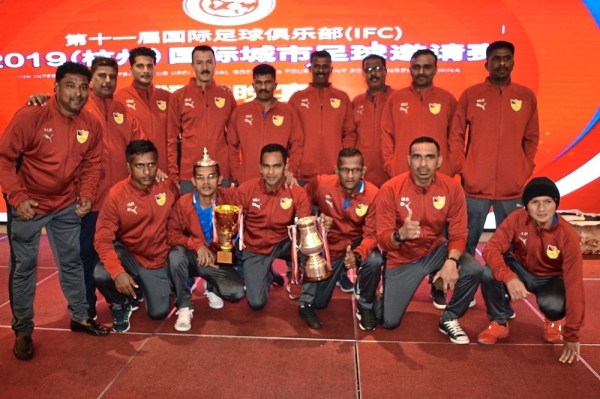 After last year’s 50th anniversary celebrations in Kuala Lumpur, IFC once again decided to hit the road and opted to return to Hangzhou where they hosted the tournament in 2011 – their first overseas tournament.

It was indeed a proud moment for IFC as they clinched their first premier title in their own tournament.

“We have won Plate titles in the past, but this is our first premier title of the tournament. We were the underdogs of the tournament including in the final against a much more experienced and well prepared KB Veteran Sri Muda side. It was indeed a determined effort by the entire squad,” said IFC president Kiranjit Singh.

IFC’s hero in the finals that they won on penalties was goalkeeper Ong Mok Hooi, who saved the last penalty kick to hand his side the title.

The Grand Masters (50 years and above) was only introduced last year and the inaugural winners were Lagenda FC from Malacca, who did not defend their title this year.