The Jr NBA Malaysia 2018 presented by Dutch Lady National Training Camp concluded with the selection of 16 Jr NBA All-Stars consisting of eight boys and eight girls aged between 10 and 14.

The 16 players will travel to Shanghai with fellow Jr NBA All-Stars from Indonesia, the Philippines, Singapore, Thailand and Vietnam to watch the NBA China Games 2018 featuring the Philadelphia 76ers and the Dallas Mavericks.

Ong Zhi Ying and Juan Tze Kai were named the Girls and Boys Most Valuable Players after an outstanding showing during the National Training Camp. 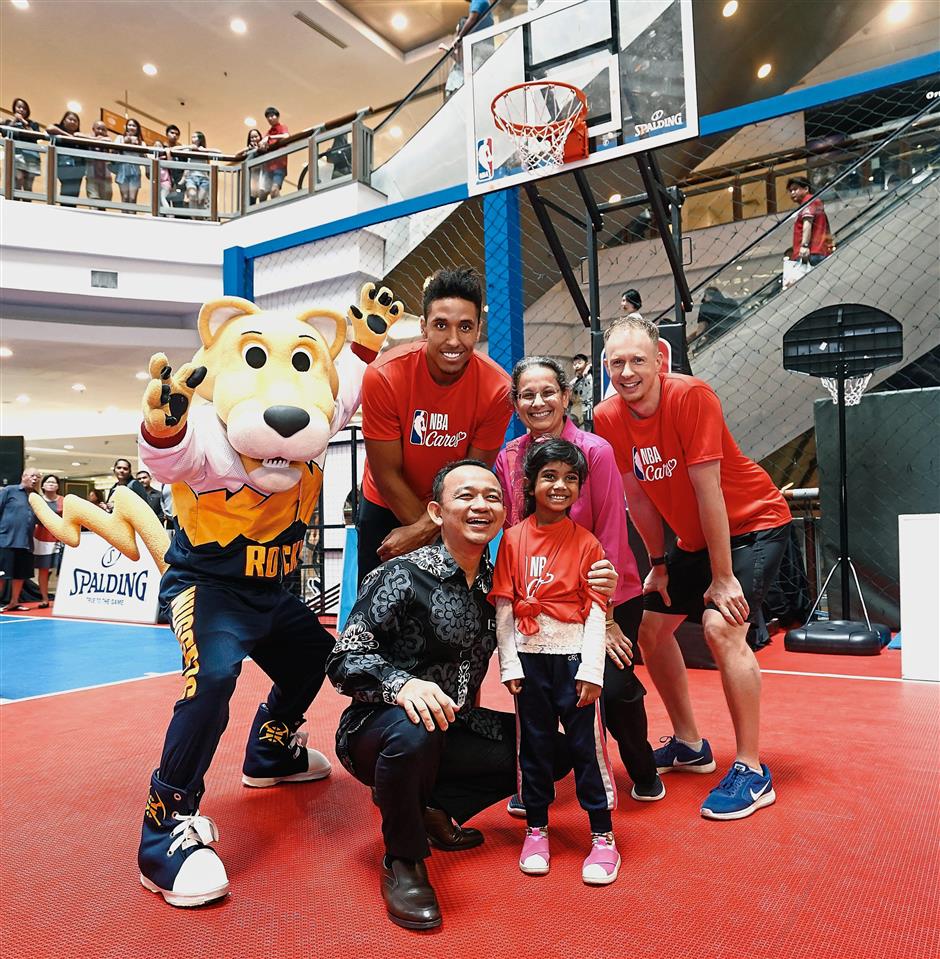 Maszlee (front, in black) made an appearance at the NBA Cares event.

The top 100 boys and girls who participated in the National Training Camp at IGB International School were taught basketball fundamentals by Brogdon and Jr NBA coach Rob Newson, as well as competed in exhibition games.

Additionally, participants learned about the Jr NBA core S.T.A.R. values of sportsmanship, teamwork, positive attitude, and respect – lessons that apply to both in sports and in life.

The NBA staged several clinics for boys and girls in local schools in Kuala Lumpur attended by Brogdon which was highlighted by the basketball donation ceremony for Westports Malaysia at SMK Dato Hamzah in Klang.

The ceremony featured a clinic and a net installation on the revitalised basketball backboard.

Through the support of Jr NBA Asia Advisory Council member Datuk Ruben Gnanalingam, Westports Malaysia will be donating basketball equipment including balls, rims and backboards with stanchions to the Klang District with the vision of ensuring all 131 schools are equipped with facilities that encourage youth basketball participation.

Brogdon also helped coach over 100 boys and girls from SJK(C) Kuang in Rawang and engaged in a NBA Cares clinic with 40 children from various schools.

He worked with the United States Embassy and the event was attended by Education Minister Dr Maszlee Malik and US ambassador to Malaysia Kamala Shirin Lakhdhir.

“Teaching the game I love and working with the Malaysian youth on the fundamentals of basketball has been the highlight of my visit in Kuala Lumpur,” said Brogdon.

“I look forward to seeing these children grow and expand their games as well as apply the values of the sport to maximise their opportunities to succeed on and off the court.”