The Under-14 footballers in action during the Games.

SOME 800 students from eight LaSallian schools gathered for the revival of the La Salle Games after a 30-year lapse at La Salle Secondary School in Petaling Jaya recently.

St Paul’s and La Salle PJ each won two out of the six contested sports – table tennis and badminton competitions were won by St Paul’s while La Salle PJ took the football and hockey titles.

However, St Paul’s achieved one point more from their placings to beat La Salle PJ to the overall Champions Shield.

The Patrick Gomes Football Award, which was given for outstanding performance in the football competition of the La Salle Games, went to Muhammad Haikal Syahputra Majidi, who played as a striker for the La Salle Klang team.

The award was sponsored by the batch mates of Patrick Gomes, who was the lead steward on board the missing Malaysia Airlines flight MH370 and was presented by his wife Jacquita Gonzales.

Education Ministry sports division director Dr Mehander Singh, who launched the Games, said the ministry would continue to endorse the initiative by the Lasallian schools community, as it complemented its efforts to enhance student exposure to sports from a young age. 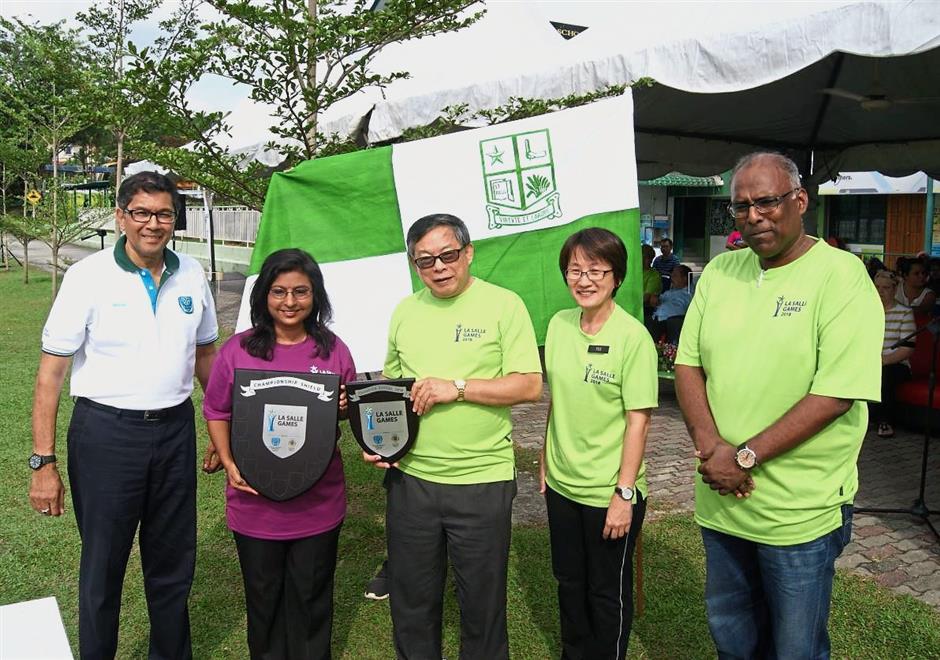 One of the aims of the Games is to identify potential athletes from an early age and nurture them towards mainstream MSSM competitions in the Under-15 and Under-18 levels.

Organisers De La Salle Brothers and the Malaysian Federation of Lasallian Alumni Associations (MFOLSA) plan to extend the Games into an annual event and plans are afoot to run it as a national programme from 2019 to involve Lasallian schools nationwide.

There are currently over 42 La Salle institutions in Malaysia, including primary and secondary schools.

MFOLSA president Michael Simon explained that the key objective of staging the La Salle Games this year is to bring back the stature of La Salle schools as the breeding ground of sports champions for the country.

“Over the years, our schools were affected by the shift of the education policy to primarily focus on academic results to the detriment of extra-curricular activities, especially sports,” he said.

“The La Salle Games is part of the initiative of the De La Salle Brothers and MFOLSA to revive the position of the schools as national institutions that provide holistic education based on knowledge and good values, towards developing outstanding young Malaysians of the future.”