Shalin ditches US plans to be with Covid positive hubby 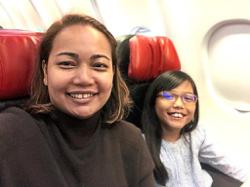 Through thick and thin: Shalin and husband, Azidi, during the World Tenpin Bowling Championship at the Pyramid Mega Lane in 2003.

Shalin, who retired from the sport after serving the country for more than two decades, will not board the plane to the US on April 27 as she will be home taking care of her husband Azizi Ameran.

Azidi, a former bowler now turned coach, has been tested positive for Covid-19.

He contracted the virus after one of his junior charges was found to be positive.

Shalin, who has won countless titles on the world stage, remained calm despite the adversity.

“I’ve received the approval to leave for the US but had to postpone it because I’ve to be with my hubby, ” said Shalin.

Azidi is asymptomatic but is currently in hospital because he is under the high risk groups. Azidi has leukaemia and myeloproliferative neoplasms (MPN), a type of blood cancer.

“He found out on Monday that one of his bowlers had Covid-19, two days later Azidi was tested positive.

“The ambulance came today (yesterday) and took him to the hospital, ” said Shalin.

“Both Aleya (daughter) and I have done our swab tests and are negative. We, however, have to self-quarantine for 10 days.

“It’s tough... but I’m staying positive. There have been a lot of life’s trials lately, maybe Allah has some big plans for me after this, insyaallah (God willing).

The Professional Women Bowling Association (PWBA)’s first tournament started this week and would go on until September.

“I can still join the league halfway, I’ll just lose some points but for now, the focus is at home, ” added Shalin, who was supposed to leave with her daughter with Azidi joining them at a later date.

Shalin, who paved the way for local bowlers to compete in the US pro league, hoped everyone will stay safe.

“This virus is everywhere but I hope the bowlers will not be discouraged by all this. For now, I just hope everyone will be safe.” Shalin picks up the pace in her quest for PWBA title
Eleventh game meltdown sends Shalin out the door in New York
Shalin says results better than expected despite early exit
Shalin gets rolling in USBC Queens
Raya relief from ‘roller coaster’
Bowlers stay in good spirits despite Covid-19 setback
Shalin off to Uncle Sam to make up for lost time in PWBA
Rafiq making money on the side to get through the pandemic
National bowlers get the nod to resume training
MTBC halt training, bowlers under quarantine