I’ll miss you all: Shalin Zulkifli celebrating a strike with teammates during the women’s team event at the Kuala Lumpur SEA Games in 2017.

PETALING JAYA: For sporting greats, knowing when to quit is the hardest challenge of all – but bowling queen Shalin Zulkifli knows it’s time.

With the heaviest of hearts, Shalin has finally decided to bid goodbye to her amazing 28-year career with the national team – marking an end to a colourful life of a young girl who turned into Malaysia’s bowling legend after breaking barrier after barrier every year.

Close to three decades, she has won from the lowest to the highest level, placed Malaysia in the world’s bowling map, won admiration from her teammates and struck fear in her foes.

It is her fighting spirit, dogged determination and the ability to bounce back from every adverse challenge that comes her way to win title after title that will be remembered the most.

The 42-year-old Shalin, although beaming with pride over the staggering collection of titles and accolades, said it was the right time. 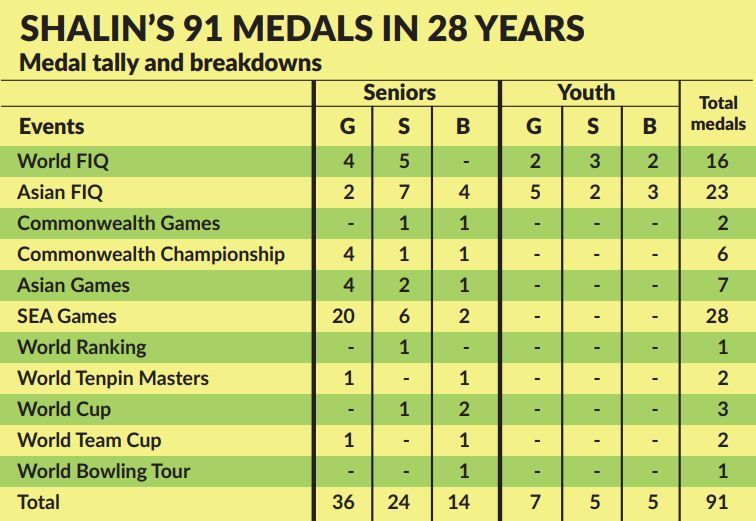 “I’ve been thinking about it for some time... it’s about time. The Covid-19 pandemic has also put things into perspective and made it easier for me to decide, ” said Shalin, who was already a national champion at the age of 13 when she joined the Malaysian Tenpin Bowling Congress.

“I feel blessed. I’ve achieved what I wanted to achieve in the 28 years. I’ve won a total of 91 medals from different major tournaments, not counting the Open titles.

“I’ve won at three world championships (2003 in Malaysia, 2007 in Mexico and 2017 in Las Vegas) with three different batches of players. Every team is special to me, ” she said.

“I was pregnant with my daughter at the 2010 Guangzhou Asian Games and won a bronze.

“Every year is special to me but the most memorable is the 2017 Kuala Lumpur SEA Games. I won the Masters in front of my fans, my husband (Azidi Ameran), my daughter (Aleya), my family and friends.

“It was like the pinnacle of my career – I guess, by then, I knew my time was up.”

There have been disappointments too but Shalin always regrouped and came through it with stronger resolve.

“I know the expectations were high at the 1998 Commonwealth Games, we were hosting it for the first time but I did not win any medals. That was the hardest defeat to take. I was out of the national team for six months under coach Chris Batson too. But it was setbacks like that made me come back stronger.”

She, however, said years of bowling had taken its toll on her body.

“My body is paying the price for all the hard work at the alley. After the 2015 Singapore Games, I had to go for a foot and ankle surgery.

“Just before the KL 2017 Games, I had a wrist injury. Then, there was a minor slipped disc.”

But she knows that without pain, there is no gain and thanked everyone who had helped her achieve the many firsts in her bowling career.

“All my coaches since I started, my teammates (previous and current), our sports science team (Dr Kamarul, Kak Ros, Dhia, Yan, See Min - all the staff at NSI who have helped prolonged my career!). My media friends and... my great fans.

“Thank you for everything...may Allah bless and repay their kindness.”

Now that her duty with the MTBC is over, she wants to settle some unfinished business.

“I’ve a long bucket list. One of my dreams is to win a professional title and I hope to do that. I’ll probably go to the United States when the situation is better to give it a last try this year, ” added Shalin, who was the first Malaysian bowler to play in a professional league in the US and paved the way for others.

Her absence will leave a void for sure. Although there are other emerging stars in the national women’s team but there won’t be another Shalin, who has ruled the bowling scene with sheer dignity, pride and love for the game.