Chan to Goh: Let’s have a really good last bash together

PETALING JAYA: Now that their participation at Malaysian Open is confirmed, shuttler Chan Peng Soon wants to ensure that it will be a grand farewell for long-time partner Goh Liu Ying at the Axiata Arena next month.

Liu Ying wanted to end her illustrious mixed doubles career at the Malaysian Open from Jan 10-15 and her wish was to bow out from the international arena by partnering Peng Soon again.

Peng Soon-Liu Ying, who have partnered each other since 2008, were ranked as high as the world No. 3 in 2012 but the highlight of their careers was winning the mixed doubles silver medal at the 2016 Rio de Janeiro Olympics.

However, due to their protected ranking points in the world ranking calculations, they still qualified as the No. 18 pair for the home tournament.

Peng Soon said next year’s edition will be a meaningful outing for Liu Ying.

“We have partnered each other for 13 years and Liu Ying deserves a grand farewell. I will ensure that the Malaysian Open next month will be a memorable final hurrah for her,” said Peng Soon.

“Initially, the drop in the ranking (No. 44) was a little concerning but fortunately, the protected ranking points helped our cause.

“We have achieved so much together and obviously, the 2016 Olympics silver medal is on top of the list.

“However, our last outing is not about results but a tribute to Liu Ying who has achieved a lot as a player and has done so much for the country.”

Liu Ying was also pleased that her retirement plan is intact.

“We are definitely looking forward to playing at the Malaysian Open. We will prepare well for the tournament and do our best,” said Liu Ying.

“We have been training separately as some of our teammates will be playing in the World Tour Finals. From next week onwards, we will be training together.”

While Liu Ying will call it quits, Peng Soon will continue playing with Chew Yee See on the international circuit after securing a sponsorship deal with Protech to prolong their careers. 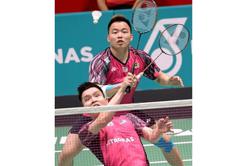