PETALING JAYA: The women’s quartet of Sin Li Jane, Siti Safiyah Amirah Abdul Rahman, Natasha Roslan and Esther Cheah ensured that the Malaysian contingent did not return home empty-handed when they grabbed a bronze in the IBF World Cup.

The team had earlier went down 1-3 to Sweden in the semi-finals but roared back with a hard-fought 3-2 win over the United States in the bronze medal playoff at the Suncity Tenpin Bowl in Queensland, Australia, yesterday.

It all came down to the final game and the Malaysians, led by Li Jane and Safiyah, held their nerves to win by seven pins (235-228).

Li Jane admitted that they felt nervous during the tight final game but was happy that they stayed calm to pull off the win.

“I would say that we did it as a team. I’m so proud of my teammates. The final game was really nerve-wracking,” said Li Jane.

“But I’m happy that we were able to make good shots when we needed to.”

Safiyah chimed in: “We knew that Li Jane and me had to strike out the last two frames.

“And we managed to do it. I just feel grateful that we are coming home with a medal.” 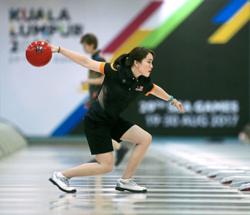