Determined: Ong Yew Sin (back) and Teo Ee Yi are eyeing for an improved show in the Denmark Open and French Open. — AFP

PETALING JAYA: Difficulties and tough times can throw you off balance.

That’s exactly what happened to independent shuttlers Ong Yew Sin-Teo Ee Yi but the world No. 9 are determined to end the rough year on a high by qualifying for the World Tour Finals from Dec 14-18 in Guangzhou, China.

Yew Sin suffered a double whammy when he was down with food poisoning and then caught Covid-19 between June and July.

It surely affected their rhythm as they failed to get past the quarter-final stage of a few tournaments after that. In fact, their best this year is only a last-four finish in the Indian Open in January.

Their biggest disappointment was their shocking defeat to world No. 32 Terry Hee-Loh Kean Hean of Singapore in the second round of the World Championships in August. They had been expected to go far, after all, they were the bronze medal winners at the last edition in Huelva, Spain.They performed better to reach the last eight of the Japan Open last month but lost 21-17, 17-21, 13-21 to South Korea’s world No. 21 Choi Sol-gyu-Kim Won-ho.

“It has been a really tough year for us,” admitted Ee Yi.

“Yew Sin had caught Covid-19 before the Malaysian Masters in July and he also suffered food poisoning a month earlier during the Indonesian Masters.

“There are no excuses though and we had prepared well for the world meet but lost early. It’s hard to accept but we have to move forward,” he added.

“We will try our best to do better in our next tournaments in Europe. Our goal is to qualify for the World Tour Finals,” said Ee Yi.

Ee Yi-Yew Sin are currently in a close battle with Badminton Association of Malaysia (BAM)’s Goh Sze Fei-Nur Izzuddin Rumsani for a spot in the Finals as they are ranked fifth in the World Tour rankings while the latter are just one spot behind them at No. 6.

Only the top eight pairs will make the cut for the Finals. Aaron Chia-Soh Wooi Yik, who are ranked ninth have already assured themselves a spot after capturing the world title, leaving their compatriots to fight it out for the remaining place.

“We don’t believe that we have a strong chance to qualify yet. For now, we just want to focus on the Denmark and French Opens. We want to try to reach the semi-finals in these two tournaments,” added Ee Yi. 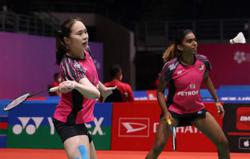