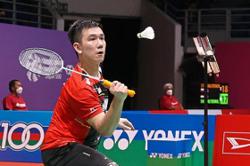 June Wei and Jin Wei, who recently signed up with new sponsor Fusionex, marched into the semi-finals of the men and women’s singles events respectively in the Vietnam Open at the Nguyen Du Stadium in Ho Chi Minh yesterday.

It was a memorable day for June Wei as he battled past Taiwan’s Lee Chia-hao 22-20, 25-27, 22-20 in a thrilling 81-minute battle in the quarter-finals to reach only his first semis in four years.

The victory was a just reward for June Wei, who had trained twice with reigning world and Olympics champion Viktor Axelsen of Denmark in Dubai this year after leaving the Badminton Association of Malaysia (BAM) at the end of last year.

He will take on China’s Sun Feixiang today for a place in the final.

June Wei is determined to keep his focus and reach what will be his first World Tour final since finishing runners-up in the Dutch Open in 2018.

“Chia-hao really played well today (yesterday) and gave me a lot of pressure. I hope that we can play a good match again in the future. I just want to stay focused and not think too much after this,” said June Wei.

The 2017 Kuala Lumpur SEA Games champion Jin Wei will take on Thi Phuong Tran of Vietnam next, who defeated S. Kisona 21-19, 21-7 in another last eight match.

Indonesian coach Nova Armada was happy with June Wei and Jin Wei’s good showing and thanked their new sponsor for stepping in.

“June Wei and Jin Wei have received new sponsorship from Fusionex. I am happy that they reached the semi-finals today (yesterday) to repay the faith shown by their sponsor,” said Nova, who trains the duo under Sports Affairs club.

“I’ve been coaching both of them since December last year. June Wei has shown good improvement since then and Jin Wei is also playing well now.

“I feel they both have a chance to reach the final today,” added Nova, who also coaches Paralympic champion