Experienced: Lim Pek Siah was the national women’s doubles coach from 2015 to 2018.

PETALING JAYA: Malaysia’s Lim Pek Siah has been making a roaring presence in Singapore to show a woman coach can also make it big abroad.

En route to the final, the husband-and-wife pair had beaten independent shuttlers Tan Kian Meng-Lai Pei Jing in the semi-finals.

The former international is currently the acting coach in charge of the doubles department following the departure of the previous Malaysian head Yap Kim Hock in May and the Commonwealth Games was her first big assignment.

She is the first woman badminton coach to venture outside of Malaysia after her contract was not renewed by Badminton Association of Malaysia in 2019.

Her commendable showing as a coach in Singapore has opened up an opportunity for her to return to Malaysia as doubles coaching director Rexy Mainaky is looking for the replacement for mixed doubles coach Paulus Firman.

Asked whether she would be keen to return home to coach, Pek Siah said: “BAM is the place I grew up since I was young. Who would not want to be part of it? I believe it is every ex-player’s wish.”

Pek Siah was the women’s doubles coach with BAM when Vivian Hoo-Chow Mei Kuan won the gold at the 2018 Commonwealth Games edition.

For now, she is just relishing her job in Singapore.

“I won a gold as a player (with Ang Li Peng) at the 2002 Manchester Games. I was standing on the podium and singing Negaraku and 20 years later, my players are standing tall and this time, I’m singing Majulah Singapore as a coach,” she said.

“The feeling is totally different but I’m happy with the pair’s breakthrough win as they have been struggling since the SEA Games in Hanoi. Terry ended his national service last year (February).

“Hopefully, they will be able to keep this momentum at the World Championships (Tokyo from Aug 21-28).

“Their victory is a great team effort.

As a coach, Pek Siah has grown and appreciated SBA for their faith in her.

“It’s great to be part of a major Games as a coach. It has been a great experience, I learnt how to manage players when they are under pressure before and during the Games,” she said. 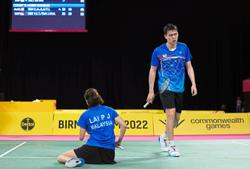